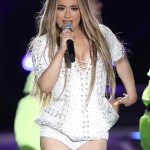 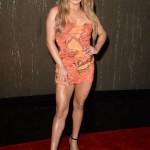 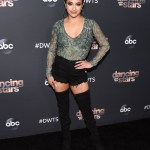 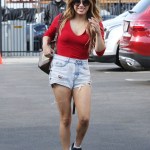 While competing on ‘The X Factor’ in 2012, Ally Brooke recalled how ‘compassionate’ Khloe Kardashian was and the memorable words the former host said after Ally’s grandfather died.

If you purchase an independently reviewed product or service through a link on our website, we may receive an affiliate commission.
It has been eight years since Ally Brooke competed with Fifth Harmony on The X Factor, and the now 27-year-old singer can still recall the memorable advice that Khloe Kardashian gave her. Khloe had been a co-host with Mario Lopez for the season that Ally starred in, which aired in 2012. Before she even got to week four of the performances, Ally lost her grandfather — and it was Khloe who helped the young singer overcome her overwhelming grief.
“I’ll never forget that moment. She was so compassionate and loving and thoughtful enough to really open up — in her own way — about her loss and to help me, I thought that that was something so beautiful and moving and it touched me!,” Ally revealed during an EXCLUSIVE interview on HollywoodLife TVTalk on Nov. 9. Like Ally, Khloe lost a big figure in her life — her own father, Robert Kardashian, who died after a battle with esophageal cancer in 2003 — which allowed the Keeping Up with the Kardashians star to empathize with Ally.
Ally also wrote about her conversation with Khloe in her new book, Finding Your Harmony, which arrived on Oct. 13. “It touched me enough to write about it. It still didn’t leave me,” Ally continued. “I’ve had many losses since then as you kind of read on in the book and that advice really never left me. Having [Khloe’s] love and having so many people’s love, helped me to get on that stage that night and it was so hard. I’ll never forget just how agonizing it was, but at the same time, just to be able to do it and getting that advice from my parents.”
Ally revealed she also had her grandmother’s moral support before she went on to sing Kelly Clarkson’s emotional ballad “Stronger (What Doesn’t Kill You)” with the rest of 5H, and recalled her grandma’s advice: “Mama, you go out there. That’s what he would’ve wanted. That’s what really gave me the strength to go on that stage that night.”
Ally admitted that she and Khloe “haven’t seen each other in a really long time,” but wants the Good American co-founder to know that she still thinks of their meaningful exchange backstage that happened all those years ago. “I hope she knows how much I appreciate that and I’m sure she does because I wrote it in my book!,” Ally said during our video interview, which you can watch the rest of above.
Ally and the rest of the 5H ladies went on to finish in third place on The X Factor in Dec. 2012, launching their immensely successful music career until the girl group went on hiatus in March of 2018. Throughout Ally’s interview with HollywoodLife, the 5H alum revealed how the group’s breakup helped her find happiness, the powerful moment she auditioned for Simon Cowell and more!