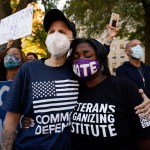 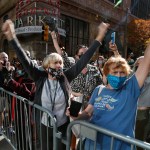 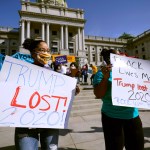 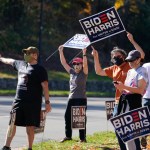 President-elect Joe Biden celebrated his 2020 election win with a powerful speech on Nov. 7 — one in which he made sure everyone felt represented.

Shortly after Joe Biden was declared the official winner of the 2020 Presidential election on Nov. 7, he and Kamala Harris started celebrating by delivering beautiful speeches. In front of a sea of supporters in his hometown of Wilmington, Delaware, Joe looked towards the future with a smile on his face, as he said, “I’m humbled by the trust and confidence you placed in me.”

As the crowd started cheering, Joe continued, “We’re reminded tonight of those who fought so hard for so many years to make this happen. Once again America has bent the arc of the universe more toward justice.” And he fully acknowledged that  the African American community was hugely responsible for helping him get elected. He said they’ve “always” had his back, so he’ll have theirs, too.

“This is the time to heal in America,” Joe said, as he promised to unify the country and help defeat the ongoing pandemic. Biden said he will name a group of scientists and experts on Monday, Nov. 9, to help build a COVID-19 plan that will begin the first day of his presidency on Jan. 20, 2021. “That plan will be built on bedrock science. It will be constructed out of compassion, empathy and concern,” he said.

“I am a proud democrat but I will govern as an American President,” he further promised, and added, “We will lead not only by the example of our power but by the power of our example … I believe in the possibilities of this country. We’re always looking ahead, ahead to an America that’s freer and more just.”

After his speech, which you can watch in full above, Joe, Kamala and their families celebrated on stage as fireworks illuminated the sky — fireworks which truly excited the President-elect. Just take a look at the photo below.

Biden and Harris’ win isn’t just welcomed after four years of the Trump administration; it’s historic. Days before the final results of the 2020 election arrived, Biden became the presidential candidate with the most votes in American history. He’s also the nation’s oldest president at 77 years old. He turns 78 shortly after the election. Harris’ election is extremely significant, too. The California senator is the first female vice president in US history, as well as the first Black and first South Asian vice president.

Their victory came after a long, drawn out — and exhausting, if you’re Steve Kornacki — election with vote counting that lasted days after the polls closed on November 3. It became clear from the beginning that Biden would have a strong lead on Trump, including in traditionally red states like Arizona and Georgia. It all hinged on those states, along with other swing states like Nevada and Pennsylvania. Four days later, Pennsylvania, where Biden was born, delivered his big win.