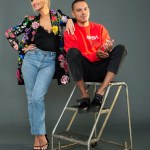 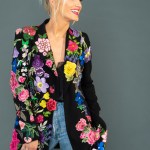 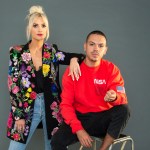 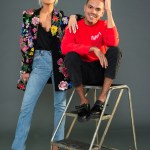 Lucky No. 3! Ashlee Simpson and Evan Ross welcomed a healthy baby boy on Oct. 29, the singer revealed in a sweet post on Instagram! Meet their new addition!

Ashlee Simpson and Evan Ross are basking in baby bliss after the birth of their third child on Oct. 29, 2020! The “Pieces Of Me” singer, 36, introduced Ziggy Blu Ross to the world in a heartfelt post on Instagram, revealing their newest addition for the first time. “10-29-2020 ZIGGY BLU ROSS,” she began the post, shared Oct. 31. “Our sweet boy has arrived! I’m over the MOON we are so Blessed!” Ashlee gushed.

Ashlee shared the cutest photo of the little boy sleeping, snuggled in a brown-and-white striped blanket. Both Evan and Ashlee’s hands protectively rested over the sweet newborn. This is Ashlee’s second child with Evan, 32, and her third total. She shares daughter Jagger Snow Ross, 4, with Evan, and she has a son, Bronx Wentz, 11, with ex Pete Wentz. The blended families co-parent wonderfully together.

Ashlee and Evan announced they were expecting their second child together back in April. “We are pregnant and we are so excited to share it with everyone,” the singer captioned a photo of the couple. Ashlee, who held a pregnancy test in the snap, used the hashtag, “Baby #3.”

Evan also shared the same photo to his personal Instagram account. “The fam is growing. Ash and I can’t wait to welcome the newest addition,” he captioned his post. The pregnancy news came just a few months before their sixth wedding anniversary. The proud parents tied the knot in a lavish Bohemian-themed ceremony in August 2014. They wed at Evan’s mom Diana Ross‘ stunning estate in Greenwich, Connecticut. The music legend officiated the union. Ashlee’s sister, Jessica Simpson, served as her maid of honor.

Back in November, Ashlee and Evan opened up to HollywoodLife about wanting more kids. “We’re working on it. Maybe there will be some news at some point. Not right now,” actor said at the time, noting that he was still filming on one of his many projects. “We still got a lot of things happening, but we definitely want to have another…we’re always practicing.” You know what they say, practice makes perfect,” he joked.