Evan Ross, 31, and Ashlee Simpson Ross , 34, got married in August 2014 and the following year they welcomed daughter Jagger, now 4. The “Pieces of Me” singer also shares 10-year-old son Bronx with her ex-husband, Pete Wentz. And, according to Evan, if things go as planned the happy couple will be soon be welcoming another bundle of joy to their brood. Evan told HollywoodLife EXCLUSIVELY, while walking the red carpet at Operation Smile’s Hollywood Fight Night Nov 6 in Beverly Hills, that he and his stunning wife are “always practicing” their baby making skills.

Evan revealed that they’re both ready for another baby, “We’re working on it. Maybe there will be some news at some point. Not right now. I’m still shooting. We still got a lot of things happening, but we definitely want to have another…we’re always practicing.” You know what they say, practice makes perfect.

Although Ashlee didn’t walk the red carpet with Evan, she joined him inside the ballroom of the Beverly Hilton hotel for the main event. Operation Smile’s annual celebrity fight night raises funds and awareness for children around the world suffering from cleft lip, cleft palate, and other facial deformities. “I love Operation Smile,” Evan told HollywoodLife, “I’m always supporting Operation Smile. It’s friends of mine. I love what they do. I think they do it so well, so efficiently in how they use the money that they get. I’ve gone to a bunch of the events. They’re friends of mine and DJ Ruckus is a good friend of mine so I’m going to be in his corner all night.” The night featured a number of famous faces in the boxing ring, including Evan’s friend DJ Ruckus. 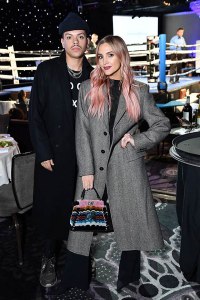 Operation Smile, an international medical charity, provides free surgeries for children and young adults in developing countries who are born with cleft lip, cleft palate or other facial deformities. Since 1982, Operation Smile has been sending volunteer medical teams all over the wold to the poorest areas and has provided hundreds of thousands of free life-changing surgeries.