Kim Kardashian might want to make a belated birthday wish for some better Photoshopping skills, if a new photo from her 40th birthday getaway to a private Tahitian island is any indication. While the SKIMS owner has taken heat over the years for allegedly altering pictures to slim down some body parts while enhancing others, this time around Kim’s right arm vanished from a snapshot. She posed in bikinis with sisters Khloe, 36, and Kourtney, 41, and her right arm seemed to cut off at the elbow.

Kim looked gorgeous in a tiny tan bikini, as she rested her left arm atop Kourt’s shoulder. Her other arm looked as if it was supposed to go around Khloe’s waist, but vanished behind Khloe’s arm, which was wrapped around Kim’s back. Fans quickly took notice of her missing appendage to call her out in the comments of the Oct. 29 Instagram photo.

User @angelicafox asked, “Where’s your arm tho???” as @katlariina pointed out, “Who needs an arm when you have a nice waist.” Fan @instac8 told Kim, “I love how your arm disappears behind Khloe,” while @crazy_o_brazy responded to the user, “clearly heavily photoshopped picture.” @ahawk2014 joked, “where’s the rest of Kim’s right arm? Lol,” as @jordanmybae
asked, “Yo where’d your arm go?” 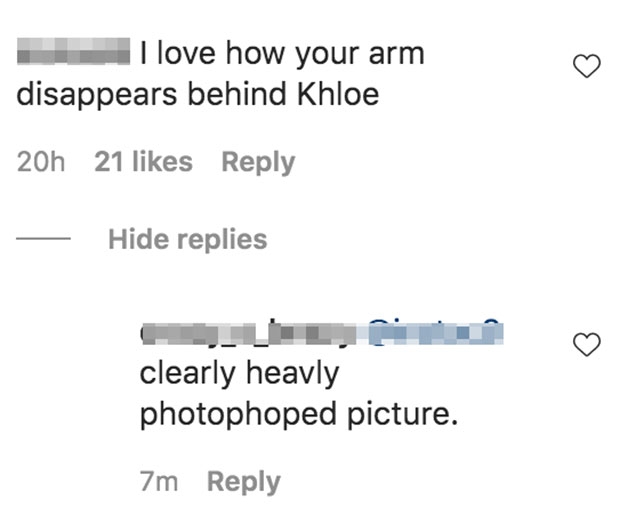 Kim’s apparently Photoshop fail was the last of her worries in the comments. The KKW Beauty founder continued to get hammered for being “tone deaf” by renting out a private Tahitian island and flying all of her family and pals there for a big birthday bash amid the COVID-19 pandemic and U.S. economic crisis. Kim wrote in an Oct. 27 IG post that she was “humbled and blessed” about gathering so many people together to party in luxury. With many Americans still suffering so badly, her humble brag really ruffled feathers among followers.

User @falldawn told Kim, “Ok so you have the $ to rent an entire island. nice but seriously most of the general population in this country are suffering.” @ovana_dacic noted, “You bragged for renting an island while pandemic engulfs USA & so many are jobless & about to be evicted. You materialistic hack. READ THE ROOM,” while @thomash6119_ scolded, “The display of exorbitant wealth and privilege during a time of record unemployment and disease is made all the more blatantly icky by Kim’s couching it all in the language of gratitude.” Well, at least the apparent Photoshop fail helped change the topic with some of the comments.