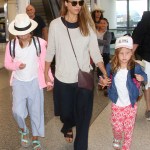 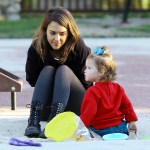 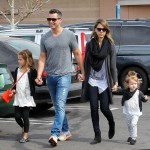 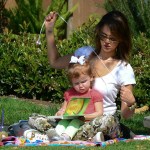 In the upcoming episode of ‘Red Table Talk’ Jessica Alba responds to the backlash she received after sharing a pic of her kids wearing face masks.

Jessica Alba, 39, is revealing what it is like to be mom-shamed when you’re a mother living in the public eye.

In an upcoming episode of Red Table Talk the actress tells the co-hosts that she was even slammed for sharing a photo of her kids wearing face masks.

“I know this picture of you and your family caused some heat,” Jada Pinkett Smith says in the sneak peek above that HollywoodLife obtained EXCLUSIVELY. The image that the Red Table Talk co-host is referring to prompted some of Jessica’s fans to accuse her of “child abuse.”

The camera then highlights an Instagram photo of Jessica with her son Hayes Warren, 2, who is wearing a face mask while riding in a car. The pic is one of a series that the actress shared of her and her three kids with husband Cash Warren – including daughters Honor, 12, and Haven, 9 – during a July family vacation to Wyoming. “We consistently wore masks,” Jessica noted in the caption, which sparked the outrage.

Family vacay in #jacksonhole #wyoming -wow! What a magical place 🙌🏽✨ … we consistently wore masks, washed/ sanitized our hands … b/c #youractionssavelives … not gonna lie -lots of negotiating and bribes to get my Hayesie boo (who’s 2 1/2 yrs old) to wear his mask, but my lil man killed the @honest mask game throughout the trip! #wearamask 😷- pic number 4&5 in swipe thru❤️🥰👊🏽— my boy!… we went on guided boat tours, hikes, bike rides and wearing a mask was a requirement in the car with the driver, on hike- as we were in close proximity w our guide and in the small boats… Got to protect my fam and others… #mamabear

“It’s just absolutely ludicrous that we’re living in a day and age where health is politicized. My mind is blown,” the L.A.’s Finest star tells the Red Table Talk co-hosts. Jada elaborates, saying, “The comment was, ‘What kind of person are you, doing such [an] unhealthy thing to your child. Are you paid for this????’ ‘That’s child abuse.’ Well, there you go.”

Jada’s mother and co-host, Adrienne Banfield Norris (aka Gammy) is clearly not impressed by the backlash. “You’re an ass. Moving on,” she says, reacting to the comment.

Jessica is just one of two celeb mom guests who discusses the sensitive issue of mommy-shaming during the episode, which goes live on Facebook Watch on Oct. 13 at 9am PT / 12pm ET. Ashley Graham, 32, also joins the conversation. The model became a first-time mother after giving birth to her little boy Isaac eight months ago. Since then she has faced intense backlash for breastfeeding her infant in public. “That’s also gross,” one follower responded to a Feb. 13 pic of her feeding her baby in a restaurant. The reaction has not stopped Ashley from posting similar photos.