Offset had nothing but amazing things to say about Cardi B on her 28th birthday on Oct. 11 — even though the two broke up one month prior. “You are amazing woman, you the best!” he wrote. “Me and Kulture are proud of you!!! Overcame every obstacle in front [of] you, they was all [sleeping] at once, then you woke the world up! Thank you for being 1000% every min I known you. Live it up, enjoy, keep f***ing balling. I’m lucky.” 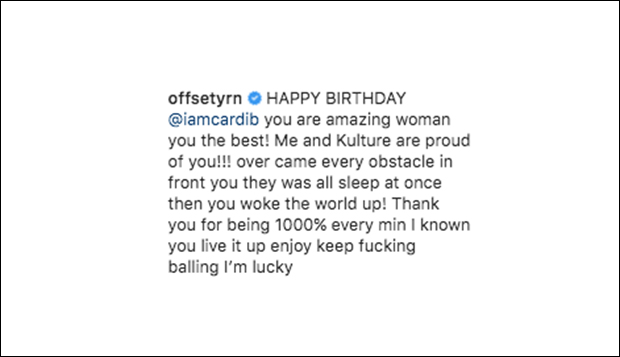 The post came on the evening of Oct. 11, a full day after Cardi and Offset reunited for her wild birthday celebration in Las Vegas. At the bash, the exes were caught kissing on video. Offset also gifted Cardi with a $330,000 Rolls Royce. Additionally, the rapper surprised Cardi with a massive billboard on Sunset Strip in West Hollywood.

The billboard contained a message to Cardi from the pair’s daughter, Kulture. “Happy birthday Mommy, love Kulture,” the message read, along with a photo of the mother/daughter duo. All of this affection comes less than one month after Cardi filed for divorce from Offset in mid-September.

However, the two appeared to be on good terms in the weeks after the split. Cardi even defended her ex on social media when trolls came after him for not treating her right. “I don’t give a f*** if you don’t like him,” she tweeted. “I don’t talk to him but you not going to disrespect my child’s father. I will slap the s*** out of you courtesy of Kulture.”

She also made sure to shut down rumors that she filed for divorce because Offset cheated, which is what many fans assumed happened. “It’s not because of cheating,” she insisted. “I’m seeing people say it’s because he’s got a baby on the way — that’s a whole f***ing complete lie.” Rather, Cardi explained that she simply “got tired of f***ing arguing,” which is why she pulled the plug on the relationship.

This is not the first time that Cardi and Offset have split amidst their up and down relationship. At the end of 2017, Cardi caught Offset cheating on her, and they briefly broke up. However, they eventually reconciled, and their daughter was born the following summer. So, fans of the on/off couple aren’t counting out a possible romantic reconciliation this time, as well — and, after Cardi’s birthday weekend, all signs are pointing to that possibility!