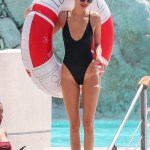 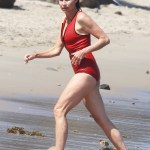 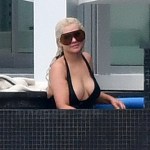 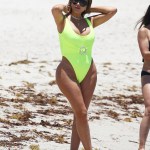 Amber Rose slayed on the beach in Mexico, rocking a low-cut black one-piece bathing suit as she hit the sand and surf with boyfriend Alexander Edwards and his best friend, Tyga!

Amber Rose is having fun in the sun in Cabo San Lucas, Mexico, and she’s dressing for it. The model, 36, hit the beach with her friends on September 24, where she stunned in a black bathing suit. The one-piece was simple, with no pattern, a halter neckline, and a short swim skirt, but it was anything but plain. It showed off her curves to perfection, as you can see in the photos below!

Amber was spotted frolicking in the sand and surf during her Mexican getaway, surrounded by friends and loved ones. Her boyfriend, Alexander “AE” Edwards, was along for some romantic days away from the kids, as was his best friend, Tyga. While it could have been awkward, seeing as Amber’s best friend is Tyga’s ex, Blac Chyna, it appeared that the pair were getting along famously.Tyga went shirtless while rocking green patterned board shorts. You could see his Calvin Klein boxers poking out of his waistband, too!

Slightly visible was Amber’s forehead tattoo, which she got in honor of her two sons: Sebastian Taylor Thomaz, 7, whom she shares with ex-husband Wiz Khalifa, and Slash Edwards, her 11-month-old with AE. Some fans were convinced that the tattoo was actually fake after it appeared missing in a March Instagram post. Guess that settles that!

Amber sparked speculation that she and AE are actually married after slipping up and calling him her “husband.” She wished her guy a happy birthday in an Instagram post on September 21, writing, “Happy Birthday Baby! Thank you for loving us so much and being the Amazing father and husband that you are!” Oops!