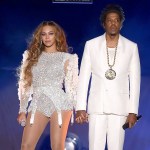 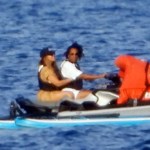 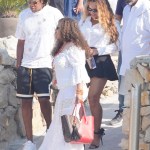 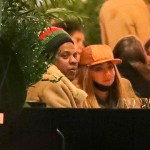 Beyonce and JAY-Z managed to slip away for a romantic date night in NYC on September 19. The parents of three enjoyed Italian food and sipped wine at celeb hotspot, Scarpetta, while wearing matching beige coats.

Beyonce and JAY-Z braved the early fall weather in NYC for a sweet dinner date on Friday night. The couple, who’s been spending most of their time on the east coast in recent months, were photographed at Scarpetta — a popular Italian spot in New York’s meatpacking district. Bey, 39, and JAY, 50, were seated in the restaurant’s new outdoor garden cafe, that’s filled with mediterranean inspired florals, trees, and ivy. After enjoying a hearty dinner, they stayed for a few hours to chat and sip wine together.

Beyonce and JAY were seated near other patrons, who didn’t make a spectacle about the couple’s star-studded attendance. The pair was matching in similar beige coats for the chilly, nighttime weather. Both the singer and rapper wore different hats. — JAY’s comfy beanie had sweater-like material and multicolored stripes. Meanwhile, Bey rocked a bright orange trucker hat with a flat brim.

Beyonce was photographed wearing a black face mask, due to the COVID-19 pandemic, as she entered the restaurant. She was later pictured at the table with her mask pulled down below her chin. Additionally, the “Already” singer stepped out in a pair of gold stilettos. Unfortunately, JAY’s full look wasn’t photographed.

Bey and JAY opted to leave their three kids — twins Rumi and Sir Carter, both 3, and daughter Blue Ivy Carter, 8 — at home for their romantic date night. The couple spent the summer in the Hamptons, New York with their entire brood, including Bey’s mother, Tina Knowles-Lawson. It’s believed that they’re still living on the east coast amid the global health crisis.