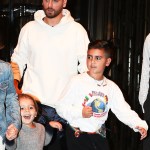 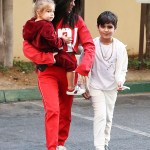 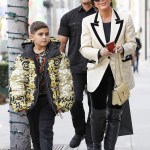 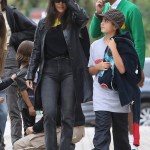 How adorable! Scott Disick shared a new snap of his mini-me son Reign, after his total hair transformation. See pics of the five-year-old with long hair, a buzzcut and more ‘dos.

Reign Disick has a whole new look! The youngest son of Kourtney Kardashian, 41, and Scott Disick, 37, has been rocking long locks for most of his life — but the five year recently had his hair chopped into a buzzcut. “The decision to cut Reign’s hair was all his,” a source told HollywoodLife earlier in the month. “He asked for it so Kourtney arranged it. It was also his decision to go for the buzz cut.” The youngster is growing up so fast, and Kourtney revealed just how emotional the cut was for her, when she shared a snap of his new look, captioned, “I am not ok.” Take a look back at some of Reign’s cutest hair moments.

In this adorable September 15 snap, proud dad Scott referred to his youngest son as “my little turtle dove.” Reign looked adorable as he curled up on the couch with a tiny brown pup, and rocked a white tee with blue track pants. The pic came a couple of weeks after Reign’s head was shaved into a buzzcut, so a small amount of hair had already grown back.

Choose wisely what you give your time, love and energy to, for what you water grows.

The best thing about long hair is that there are so many ways you can style it! Here, Reign is seen wearing his long hair in a messy bun. Kourtney posted the pic while on a mini vacation with her kids in Newport Beach, California. The five-year-old is seen trying his hand at fishing off the dock, while wearing a white top and black pants.

. 1? Long? 2? Leo? 3? BUZZ All boy 💙!! #Reign @kourtneykardash @letthelordbewithyou thank you for the honors of his first haircut!

In a carousel post shared on August 4 by Jason Schneidman of The Mens Groomer Shop, the men’s hairstylist posted three pics of Reign’s entire hair journey. In the first snap, he posed with Reign, whose wet tresses were practically down to his waist. The second image featured a selfie of the duo smiling for the camera while Reign rocked a cute, short ‘do. Jason commented that he looked like “Leo,” aka Leonardo DiCaprio. The third shot showed Reign totally buzzed, and a proud Scott could be seen in the background!

Kourtney revealed just how emotional the haircut was, when she revealed the total 180 hair makeover on August 4. “I am not ok,” she captioned this photo, which showed Reign looking effortlessly cool as he posed in a field. “Tell me you saved his hair,” a concerned fan commented, to which she replied, “It will be with me forever.”

Scott Disick’s “loves”, Reign and big sis Penelope Disick, 8, were snapped by their dad back in April 2020 enjoying a day by the pool. The adorable shot showed a long-haired Reign tugging on his sister’s legs, seemingly begging her to get in the pool with him. His unkempt hair was so long, as he wore a pair of swimming bottoms, and his big sis opted for an orange swimsuit.