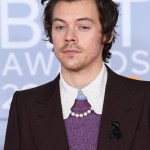 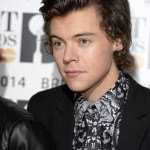 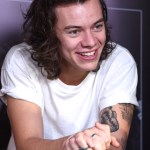 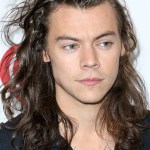 Harry Styles showed off his brand new look when taking a selfie with a fan that circulated on social media. Check out Harry’s new ‘do in the selfie snap that fans are going wild over!

New day, new Harry Styles! The “Watermelon Sugar” singer, 26, posed with one eager fan who wanted to snap a selfie with the former One Directioner in a September 15 pic. In the photo, Harry looked incredibly relaxed, as he usually is with his legions of fans and supporters. The singer flashed a peace sign at the camera while rocking a T-shirt and light sweater with sunglasses, which you can see here.

Harry also debuted a new look with his hairstyle. The singer showed off his expertly styled ‘do, which featured a side swept look not unlike the kind he sported when he and the members of One D were first discovered. Harry also cut down on his facial hair, working a subtle stubble. Fans immediately took to the comment section of the snap and flipped out over Harry’s new look.

“The mustache is gone, prince hair is almost back, it’s like all my dreams are coming true, holy f**king sh*t god is real the Universe has been blessed by the holy spirit we’re winning HELP,” on fan emphatically wrote. Another chimed in to share similar sentiments. “ANTI MUSTACHE NATION WE WON WE WON,” they wrote. One young fan even said that they were ready to “start crying in math class” after seeing the pic!

Prior to this recent photo, Harry was spotted in late July sporting a drastically different look. The actor was seen with a full mustache and his hair covered with a baseball cap during a run in Rome. At the time, Harry was fashioning his brunette locks with some soft curls, rather than the waves he’s working this latest selfie. But the fresh look could be for something Harry has in the works.

The singer is heading back to the movies and joining actress Florence Pugh in Olivia Wilde‘s next directorial vehicle Don’t Worry, Darling. Harry is taking over a role that originally had Shia LaBeouf slated and the storyline sounds fascinating. While the plot is currently unknown, the film has been described as a psychological thriller centering on an unhappy housewife in the 1950s, according to IMDb.

Along with Oscar-nominated Florence Pugh, Harry will star alongside Dakota Johnson and Chris Pine. But this isn’t Harry’s first foray into acting. In 2017, Harry starred in the ensemble cast of Christopher Nolan‘s Dunkirk. He played Alex, a young British soldier in World War II trying to escape enemy lines along with a cohort of other young servicemen in one of the largest civilian-led rescue missions in history. Harry is seriously growing his filmography, and we cannot wait to see more of what he does in the future.