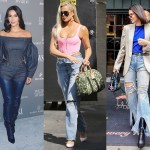 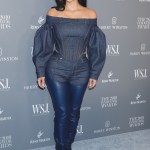 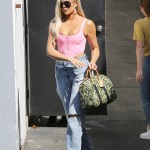 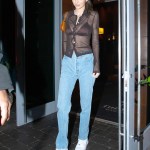 So rude! Kourtney Kardashian put a troll in their place after they slammed her latest ensemble on social media.

Kourtney Kardashian, 41, is known from time to time to clap back at people who have less than flattering things to say about her appearance. The mother-of-three posted a set of IG photos on Thursday, August 27, where she looked absolutely stunning in a strapless green top and jeans while striking a couple of fierce poses amid a sunny background. “Those jeans don’t do a thing for her…ugh,” a hater wrote before finishing off their comment with a compliment. “And she has a great body.” Kourtney responded in the funniest of ways by simply writing, “mom jeans”, next to a blue heart emoji.

She even referenced her mom jeans as the caption to the post. “mom dot com,” Kourt hilariously wrote. The legendary reality star’s outfit was labels galore as well, as pointed out by a fan, who mentioned that she was rocking vintage Prada and Dior up top, Helmut Lang for the jeans and Bottega Veneta for her shoes. Take that troll!

Kourtney has been having a lot of fun, fashion wise, on her wildly popular Instagram accounts as of late. She gave her millions of fans a reason to go “OMG” when she posted a bunch of hot throwback photos of her with BFF Steph Shepard last weekend. It was here that she showed off their fun Halloween cowboy costumes that included a pair of dazzling short metallic silver shorts.

She kept the sexy thing going days later with her new BFF Addison Rae, 19. The popular TikTok star nearly broke the internet when she posted a photo of her and Kourtney lounging in their bikinis at Kris Jenner‘s Palm Springs estate.

Kourtney also recently shared her diet tips that help keep her in tiptop shape.  She eats an organic, dairy-free, keto diet, the latter of which has also been lauded by many other celebrities including Jersey Shore stud Vinny Guadagnino.