Jessa Duggar is setting the record straight about recent reports that she’s pregnant once again. Jessa posted a collage of photos of her son, Henry Seewald, on Instagram on Aug. 1. One fan took to the comments section to flat-out ask if the Counting On star was pregnant because they thought they spotted a baby bump in one of her other recent pics. 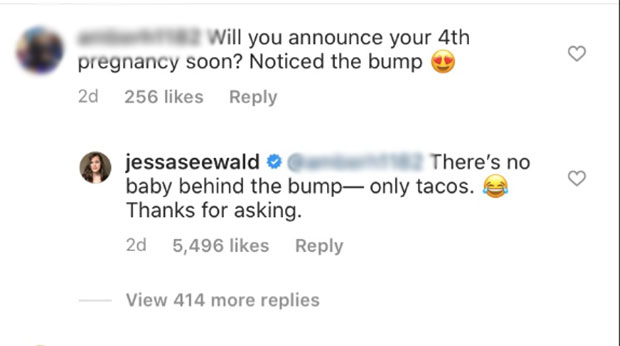 “Will you announce your 4th pregnancy soon?” the fan asked. “Noticed the bump.” In response, Jessa revealed that she is NOT pregnant. “There’s no baby behind the bump — only tacos,” Jessa wrote back. “Thanks for asking.” Many other fans jumped in to criticize the commenter for speculating that Jessa was pregnant, too.

Jessa and her now-husband, Ben Seewald, began courting in 2013. They got engaged less than one year later and were married on Nov. 1, 2014. The pair’s first son, Spurgeon, was born in Nov. 2015, followed by Henry in Feb. 2017, and a daughter, Ivy, in May 2019. Jessa is very open when it comes to sharing photos of her family life on Instagram, even if she’s met with criticism and unwarranted comments sometimes.

Even though Jessa and Ben are not expecting right now, there’s still plenty of baby joy to go around in the Duggar family. Joy-Anna Duggar, who is married to Austyn Forsyth, is expecting the couple’s second baby, a girl, in August. Joy-Anna, whose son, Gideon, was born in Feb. 2018, tragically suffered a miscarriage while pregnant in 2019, so this rainbow baby is quite a miracle for the family.

Jinger Duggar has a similar story. She and Jeremy Vuolo had their daughter, Felicity, in July 2018, and revealed in 2019 that Jinger had miscarried their second child. In May 2020, they revealed that Jinger was pregnant again, and their daughter is due this November. As for Jessa — it looks like she be happily sporting her apparent ‘taco bump’ for now instead!