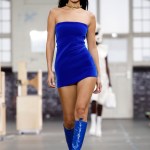 Bella Hadid took to Instagram to share a video that showed “bugs ganging up” on her while she was building a swing with a power tool and pieces of wood outside.

Bella Hadid, 23, spent the afternoon of July 20 putting her building skills to use and she shared the memorable moment in a new video on Instagram. The model revealed she was making a “swing” in the caption for the post, and added pics of the process along with the clip that showed her in action. She wore a cheeky white crop top that had a graphic of a red mushroom with the words, “Eat Me” on it and black shorts  in the clip, as she knelt down and used her power tool on some pieces of wood.

She had her hair pulled back and wore jewelry during the fun activity and a large tree could be seen in the background of the video. At one point, Bella was swinging her hand around to shoo away bugs that were flying around her. In the attached photos, various swings could be seen painted in all difference colors, including one in red and yellow and one in purple.

“Bugs ganging up on me but … built a swing 🍃she’s not done but one day you’ll get the final I promise,” the model captioned the post. Fans were quick to respond with comments that complimented her craftiness. “She’s creative,” one comment read while another read, “We love a building queen.”

When Bella’s not spending time being crafty on her own, she’s enjoying hanging out with her big sister Gigi Hadid, 25, who is about to become a mom. The aunt-to-be has been in quarantine with Gigi and their mom Yolanda, on their family farm in Pennsylvania and a source told us that she’s loving it. In fact, the beauty has been a support system for Gigi during her pregnancy.

“Bella and Gigi have always had an incredibly special bond and Bella has been so sweet and incredibly supportive to Gigi during her pregnancy,” the source EXCLUSIVELY told HollywoodLife. “This is no surprise to anybody though, because their connection is as close as any sisters could be. Bella is very grateful she’s been able to have so much time with Gigi on the farm during the quarantine so that she could share this experience with her. Their lives have always been hectic with their careers that she feels it was meant to be that they had this time together, and it’s something she’ll never forget.”