Fans of Tamar Braxton are worried sick about the 43-year-old singer and reality star, after she was reportedly found unresponsive in her hotel room at the downtown L.A. Ritz-Carlton residences. She’s reportedly now hospitalized, and her celebrity pals are sending their love, as well as messages about how strong she is. Real Housewives of Atlanta star NeNe Leakes, 52, had spoken with Tamar earlier in the day prior to her alleged hospitalization, and intimated via an Instagram post that her pal was going through a tough “moment.” 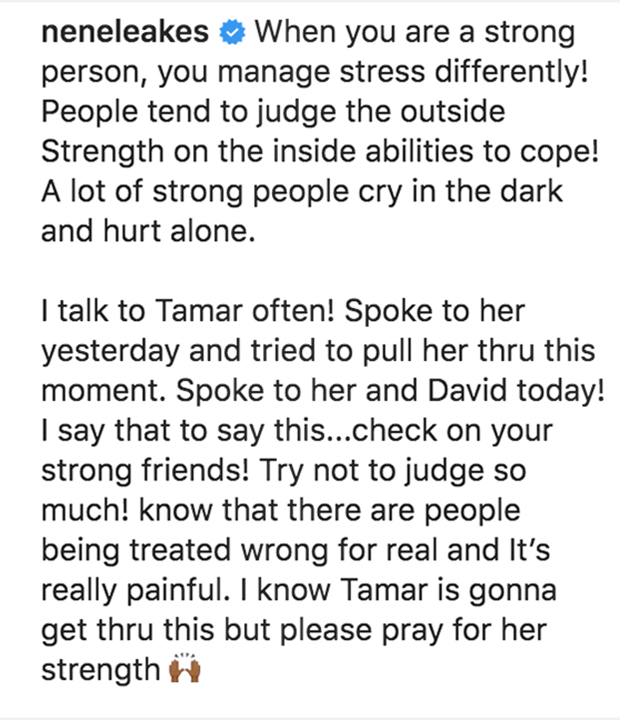 “When you are a strong person, you manage stress differently! People tend to judge the outside Strength on the inside abilities to cope! A lot of strong people cry in the dark and hurt alone,” NeNe wrote in the caption of a July 17 Instagram post next to a photo of the two ladies.

NeNe continued, “I talk to Tamar often! Spoke to her yesterday and tried to pull her thru this moment. Spoke to her and David today! I say that to say this…check on your strong friends! Try not to judge so much! know that there are people being treated wrong for real and It’s really painful. I know Tamar is gonna get thru this but please pray for her strength.”

Singer Mariah Carey, 50, also sent along her love in a heartfelt tweet. Tamar’s sister Traci Braxton, 49, took to Instagram, where she posted an image which featured the text, “Keep my family in your prayers.” Actress Viola Davis tweeted, “Praying for Tamar Braxton. Mental Health has got to be a part of our ‘wokeness.’ There is strength in vulnerability. You matter Miss Tamar Braxton. Praying for you, your beautiful son and family.”

Praying for Tamar Braxton. Mental Health has got to be a part of our "wokeness". There is strength in vulnerability. You matter Miss Tamar Braxton. Praying for you, your beautiful son and family. ❤❤🙏🏿🙏🏿🙏🏿 https://t.co/Mrh3vNB4C7

“Tamar has had a very tough and emotional day — more information will be coming in the next few days. Please pray for her,” the Braxton Family Values star’s rep told The Blast, as the site was the first to report on Tamar’s hospitalization late on July 16. The site reported that she was found “unresponsive” by her boyfriend David Adefeso, who called 911.

The couple usually does YouTube livestream show on Thursday nights called Coupled & Quarantined. Instead a 10 minute video was posted that told of how Tamar was sick. It read, “Hello y’all, unfortunately your girl Tamar is under the weather today and not feeling well so we need to postpone today’s show (don’t worry it’s not COVID). We’re sad because we had a great show lined up for you today, but next week’s show is going to be even bigger and better.” The message continued, “So sorry for the inconvenience, we know many of you look forward to the show every week. We’ll make it up to you next week.”