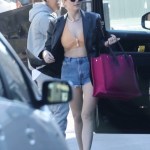 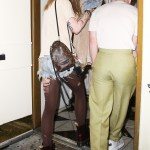 Ashley Benson looked like the image of summer, sporting a pair of denim Daisy Dukes and a gorgeous orange silk top while out grabbing coffee in Beverly Hills, as her romance with G-Eazy gets more serious.

Who wears short shorts? This week, it’s Ashley Benson! The 30-year-old starlet was looking all set for summer as she stepped out on Monday, July 13, to grab a cup of coffee. Ashley sported a pair of denim Daisy Dukes, black Converse sneakers, and a gorgeous oversized orange silk top designed by Nanushka. Although this photo doesn’t show it, fans can rest assured that Ashely was being very safe while out and about. She wore a face mask and carried it with her to each new destination!

This is one of Ashley’s few solo trips out and about, as she has recently been spending a lot of time with her new flame, rapper G-Eazy. As it would happen, the actress and 31-year-old rapper have really gotten close since their relationship was confirmed in May, following Ashley’s split from Cara Delevingne. “They’re a full-on couple now. It just sort of happened because they like being together so much,” a source shared EXCLUSIVELY with HollywoodLife. “They’ve barely gone a day without seeing each other in the past month.”

Ashley and G-Eazy (born Gerald Gillum) even hit quite the milestone in their relationship when Ashley brought the rapper as her date to her sister’s June wedding! Given the slow pace of everyone’s daily life under the strains of the coronavirus pandemic, the pause has given Ashley and G-Eazy the necessary time to invest in their relationship. “[Ashley and G-Eazy’s] lives have been slowed down by all the COVID-19 restrictions, so they have had the chance to hang out more than usual, and are getting to know each other better,” a secondary source shared.

“G-Eazy often wants to be in a relationship, but then he goes on tour and temptation sets in. The thing with Ashley is that he really finds her very fun and cool, and very unique, and realized that they work as a couple,” the source went on. The rapper, who was previously in a relationship with singer Halsey has really seemed to settle in with Ashley.

The two have been seen enjoying a lot of time together and haven’t been shy about showing off their fresh relationship. In June, the two were spotted getting in a nice hike through Los Angeles as lockdown restrictions began to lift. But with the city likely heading back into another stay-at-home precautionary phase, these two stars will have more than enough time on their hands to continue exploring their relationship.