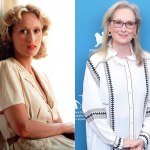 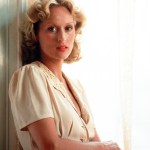 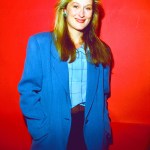 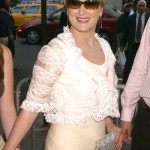 Meryl Streep appeared on a virtual concert for legendary composer Stephen Sondheim’s 90th birthday, and had the viral moment of the night with her cocktail!

Meryl Streep, 70, can do no wrong! The Oscar winner is seemingly getting through quarantine with a cocktail (or two), according to her appearance on the virtual 90th birthday concert for legendary composer Stephen Sondheim! Meryl popped up on the star-studded special to sing “The Ladies Who Lunch” alongside Christine Baranski and Audra McDonald, and expertly shook up her very own martini at the same time!

“And here’s to the girls who play smart — aren’t they a gas?/Rushing to their classes in optical art,” she sang from the 1970’s song, penned by Stephen for the play Company. The 70-year-old was cozy in a cream robe as she joined in the virtual Zoom concert from home, rocking her signature wire glasses. “Perhaps a piece of Mahler’s/I’ll drink to that,” she continued singing, as she poured the martini into her glass (complete with lemon zest) and proceeded to take a very big sip!

The Twitterverse couldn’t get enough of the Meryl moment, and quickly turned the it into a meme! “Here’s the Meryl martini quarantine gif I didn’t know I needed until tonight,” @michcoll hilariously tweeted, adding a looped video image of the Big Little Lies star pouring the cocktail. “Meryl Streep being the ultimate quarantine mood,” @streep_lover declared, while fan @sincerely__ivy wrote, “My new spirit animal is Meryl Streep making a martini and then chugging a bottle of whiskey after, while singing to ‘Ladies Who Lunch.'”

It turns out that the Oscar winner also happened to reveal she shares something in common with 007 agent James Bond: “The world learned today that Meryl prefers her martini shaken not stirred. Duly noted,” Twitter user @vchau2020 pointed out. The It’s Complicated actress didn’t stop with the dry martini, as she went on to open an entire bottle of whiskey for her Sunday evening in. We’re guessing she was planning to share with husband Don Gummer? Either way, the move led fan @antiqueroman to dub the acting legend her “patronus” after drinking the scotch right out of the bottle!

My new spirit animal is Meryl Streep making a martini and then chugging a bottle of whiskey after, while singing to “Ladies Who Lunch.”

Meryl was one of many A-Listers to unite for the “The Take Me To The World: A Sondheim 90th Birthday Celebration” special, which also served as benefit for charity Artists Striving To End Poverty. Jake Gyllenhaal, Neil Patrick Harris, Josh Groban, Ben Platt and Kristin Chenoweth also made appearances on the virtual stream.