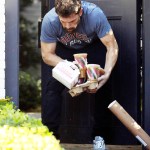 From traveling abroad to quarantining together, an insider reveals how Ben Affleck and Ana de Armas feel about all ‘the time’ they’ve spent by each other’s sides!

Ben Affleck and Ana de Armas‘ budding romance is going just as successfully as their PDA photos suggest! With a recent trip to Cuba and Costa Rica, followed by time spent together in Los Angeles amid the coronavirus pandemic, an insider reveals how all this romantic R&R is shaping their relationship. “The time they have been spending together has gotten them very close and they really love where it is all going,” a source EXCLUSIVELY tells HollywoodLife. Ben and Ana started off as co-workers, who just wrapped filming on their psychological thriller Deep Water in February.

Ben is feeling just as optimistic about his personal life, we’re hearing! “Ben is in one of the best places he’s been in a long time,” our insider continues. The Justice League star has long been fighting alcohol addiction, and completed his most recent stint in rehab in Oct. 2018. Save for a minor slip during Halloween week in 2019, the actor has been focused on co-parenting his three children Violet, 14, Seraphina, 11, and Samuel, 8, with his ex-wife Jennifer Garner. The father has also been on a grind when it comes to his career — Ben’s new sports drama, The Way Back, released on March 6! Now that Ben has found love along the way, our source adds, “It is really cool to see it working out for them [Ben and Ana] both.”

Ben and Ana are even sticking close amid California’s stay-at-home order, which was issued on March 19 to contain the coronavirus. The co-stars couldn’t hide their affection from the paparazzo after leaving Ben’s home and sharing a sweet kiss in an LA neighborhood on March 24. The couple was getting fresh air to walk Ana’s dog, just like they did three days prior (as you can see in the photo below). Notice the way they look at one another!

Ben and Ana first sparked romance rumors with their trip to Havana in early March, where Ana grew up. At the time, it was unclear if the trip was romantic (they’re co-stars, after all). Those questions were put to rest after Ben and Ana were pictured going in for a kiss on a beach stroll in their next destination, Costa Rica, just a few days later!