Patrick Schwarzenegger, 26, doesn’t think Hannah Ann Sluss, 23, will be “flyin’ solo” for long! That’s what Hannah captioned her post on March 10, which was of course a diss about her short-lived engagement with Peter Weber, 28, that ended during the Bachelor finale. “Flyin’ solo… no turbulence accepted. PERIOD,” Hannah posted on Instagram on Tuesday, the same day part two of the finale aired. Despite the clever wordplay (Peter is a pilot), Patrick left a hopeful message in Hannah’s comments section.

“We’re gonna find yah a good guy in no time!” Patrick commented. Arnold Schwarzenegger’s eldest son even has plans to meet up with Hannah soon, along with model Abby Champion, 23 — he continued to write, “Cant [sic] wait for the drinks to flow this weekend! @hannahann @abby champion.”

The comment was music to Hannah’s ears. She responded to Patrick, “YAS!!! 👏 Thats [sic] what I love to hear!! ♥ The best is year [sic] to come!” We love to hear it as well! Hannah deserves a happy ending after the mess that unfolded in the second half of the Bachelor finale, which aired on March 10. Although Peter proposed to Hannah during the finale, he got cold feet due to his persistent feelings for Madison Prewett, who dumped him during the final rose ceremony in Australia. A month later, Peter decided to backtrack on his engagement with Hannah. 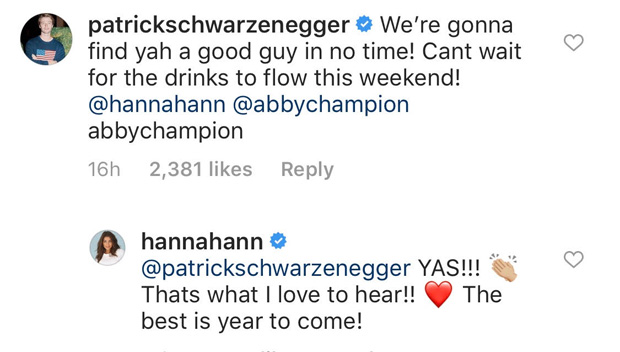 (Instagram)”I want so badly to be able to give you everything, give you my entire heart, because that’s what you do to me and that’s everything you deserve, and I can’t do that. I’m so sorry,” Peter told Hannah after making the shocking decision. Like viewers, Hannah didn’t see this coming. “You took away from me my first engagement,” Hannah told Peter in response to the betrayal. “You took that away from me, because I trusted you.” Hannah was just as peeved when she confronted Peter during the After The Final Rose reunion that aired live on March 10, right after the finale played out.

Related: Arnold Schwarzenegger’s Children: Who Are They?