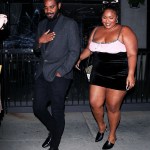 Hot new couple alert? Lizzo joked that she ‘collabed’ with fellow Brit Awards performer Harry Styles, then got super graphic about what went on between them physically.

It was a big night for both Lizzo and Harry Styles on Feb. 18, as each artist was performing at the 2020 BRIT Awards. The 31-year-old “Good As Hell” singer did an interview with the UK’s KISS Breakfast’s Tom & Daisy radio show ahead of the ceremony, and got raunchy when it came to her pal Harry, 26. When host Daisy Maksell asked “are we going to see any little collab” between the two artists onstage at the awards, Lizzo responded, “the collab happened last night.” She then burst out in laughter, telling the radio hosts that she had “too many inappropriate jokes.”

When host Tom Green told her, “That is like my ideal dating scenario, Lizzo and Harry Styles together,” she responded, ‘We collabed. His d**k in my a**hole,” which the radio station fortunately bleeped out. “I’m just kidding,” Lizzo continued with a loud laugh. Then she got real, saying, “I’m excited to see Harry’s performance cause I’m such  fan. I’m such a fan of Fine Line (Harry’s second studio album) so I can’t wait to see what he does. So no, we won’t be collaborating.” At the night’s BRIT Awards, Harry ended up performing his ballad “Falling,” while Lizzo crushed it in a brown leather bodysuit to her her smash “Truth Hurts.” The pair even sat together in the audience at the show, as Harry sweetly cuddled his head on Lizzo’s shoulder.

Earlier in the interview, Lizzo was asked who she hoped would win big at the awards show. “You know I love Harry Styles. I love Harry, so I hope Harry wins,” she responded. Harry and Lizzo actually did collab — music wise — on Jan. 31 at a performance ahead of Super Bowl LIV in Miami.

Lizzo seemed like she was going to start into her hit “Juice,” before she stopped and told the audience at Sirius XM’s LIVE @ The Fillmore Miami Beach concert, “Hold up. I need to bring somebody out. Ladies and gentleman, Harry Styles!” she announced. He came onstage and took the first verse, and then they paired up in the chorus. Harry and Lizzo had a blast, coordinating their dance moves together in a truly joy-filled performance. Lizzo even changed up some of her lyrics to make the tune flirty towards Harry, and it was clear these two artists adore each other.