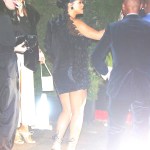 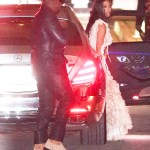 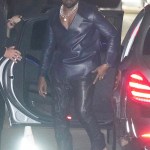 Once the Oscars ended, the place to be was the Chateau Marmont, where Beyonce and Jay-Z hosted their annual, ULTRA exclusive after party! Stars like Rihanna and Kimye were there to celebrate.

What’s important enough to get Rihanna on a plane from New York Fashion Week to Los Angeles overnight? Beyonce and Jay-Z‘s Oscars after party, of course. Rihanna, 31, was spotted rolling up to the Chateau Marmont in Hollywood for Bey and Jay’s annual, exclusive bash on February 9, dressed to the nines, obviously. Rihanna rocked an asymmetrical, little black dress straight off the Alexandre Vauthier runway, flaunting her incredible legs in the short mini. The unique frock featured one dramatically ruffled sleeve, and ruffles up and down the sides, as well. She accessorized with strappy high heels, and black jewel earrings, her hair slicked back into a tight bun. See a full-length look at Rihanna heading into Bey and Jay’s Oscars party below!

Tktime after fans assumed Beyonce shaded Kim Kardashian by not sending her one of those coveted Ivy Park boxes (false, she did!), Kim and Kanye West partied the night away with Bey and Jay. The couple were spotted stepping out of their car and making their way into Chateau Marmont shortly after attending the Vanity Fair Oscars party, dressed in the same glamorous getups. Kim, as always, looked like an absolute goddess in a cream-colored, vintage Alexander McQueen gown, officially called the “oyster shipwrecked dress.” It fit her like a glove — to the point that she said in an Instagram story on the way over to the party that she wasn’t able to sit down in the car, lest she pop a seam! “But it’s worth it. McQueen,” she said.

Kanye looked cool in an all-leather getup, including a leather blazer and black leather pants. He accessorized with a chain around his neck and suede shoes. Inside they party, they reunited with her sisters, including Kylie Jenner, who just attended her very first Vanity Fair Oscars party!

To see more stars arriving at Beyonce and Jay-Z ultra exclusive Oscars after party, like Kourtney Kardashian, Khloe Kardashian, Gabrielle Union, and La La Anthony, scroll through our gallery above!