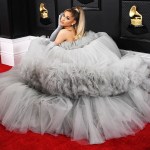 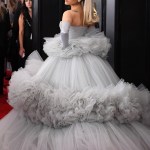 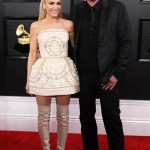 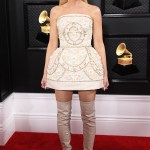 Lizzo opened the 62nd Annual Grammy Awards on Jan. 26, and already gave one of the best performances of the night, showing just why she’s an eight-time nominee.

Lizzo, 31, nailed her Grammy Awards performance on Jan. 26. “Tonight is for Kobe,” the singer roared before going into her song. Wearing a gorgeous black gown, Lizzo belted her heart out for fans, when a stunning ballet performance began. Then a wardrobe change and Lizzo went right into her hit “Truth Hurts!” Of course, she also added a jaw-dropping flute solo during her performance of the tune.

Before her performance Lizzo was serving her fans glamour, fashion, and confidence all her own when she stepped out on the red carpet! The “Truth Hurts” singer was truly a sight to behold, wearing a stunning white gown. Lizzo appeared on the red carpet wearing the old Hollywood inspired Versace dress, which featured a sexy slit up her leg and a luxurious wrap which she carried around her arms. Lizzo’s hair was done in an understated manner, worn long and down her back with a few subtle curls. Her accessories included a sparkling necklace. She just radiated on the red carpet!

The “Soulmate” songstress is poised for quite an incredible night. Later on in the telecast, she will make her performance debut on the Grammy stage in front of her industry colleagues and fans alike. Lizzo walked into the night with eight nominations — the first ones she has received in her long career. Of the eight nominations, Lizzo could win her first Grammy in the categories of Song of the Year, Record of the Year, Album of the Year, Best New Artist, and more!

2019 was a major year for Lizzo, who is most certainly entering 2020 with a whole new lease on her career. Prior to the Grammys, Lizzo left quite an impression on both the red carpet and stage at the American Music Awards on Nov. 24. Before her soulful rendition of “Jerome,” Lizzo arrived at the fan-voted awards show wearing an orange mini dress and carrying the tiniest Valentino purse on the planet! When it came to her time on stage, Lizzo left an indelible mark. She belted her heart out while crooning about a lovelorn heart, surrounded by brilliant light. There was no doubt that she was the center of attention, wearing a tulle red-rose dress that cascaded down her body. But while the singer has been wowing audiences on the red carpet and on stage, it’s also the work she has done with her platform that has made the “Like A Girl” singer such a force to be reckoned with. During her February 2020 profile with Rolling Stone, published on Jan. 22, she candidly discussed how she’s become a symbol for the growing body-positivity movement and how her own platform has enveloped the radical, feminist stance. “I’ve come to terms with body dysmorphia and evolved,” the 31-year-old revealed. “The body-positive movement is doing the same thing. We’re growing together, and it’s growing pains, but I’m just glad that I’m attached to something so organic and alive.” But Lizzo doesn’t want to just be synonymous with a movement; she wants to be known for her music, as well. “I’m so much more than that. Because I actually present that, I have a whole career,” she said, adding “It’s not a trend.”

Lizzo turned the industry on its head, and all for the better. Fans cannot wait to see how the rest of her night goes at the Grammys! Lizzo, Billie Eilish, Lil Nas X, Ariana Grande, H.E.R., and FINNEAS are the night’s top nominated artists. However, it’s Lizzo who leads the pack with her aforementioned eight nods. Billie and Lizzo also make history tonight as the two first time artists to be nominated in all four General Field categories. Keep checking this space, Lizzo fans. There’s more to come at the 62nd Grammy Awards!