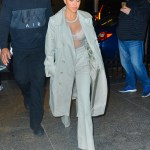 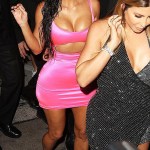 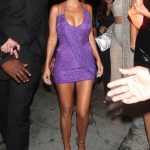 Kourtney Kardashian sizzled in many holiday gowns shortly after confirming her romance with Younes Bendjima was back on!

Christmas may be over but Kourtney Kardashian‘s Instagram is just the gift that keeps on giving! The Keeping Up With The Kardashians star, 40, took to Instagram on Dec. 27 to share a series of seductive snaps, featuring not one, not two, but three gorgeous gowns, posing in a variety of places around her home. The first three were the more glam of the series, beginning with a muted red and black silk dress that perfectly hugged her curvy figure. Kourtney looked very poised as she stood outside in the patio by her yard, allowing for the light to cast a subtle but gorgeous sheen off of the dress’ material. The second featured a vibrant green gown that stood out against the Christmas construction that was clearly taking place still in the background. And finally, the third dress, which ultimately was the dress she wore to the annual KarJenner Christmas party on Dec. 27, was a bold, bright red that screamed holiday spirit, but in the chicest way. The last three photos in the series showed Kourtney in each one of the dresses in a more relaxed, pre-glam stage of getting ready.

The caption for the post simply read, “rare decisions with Vogue Magazine,” and fans and friends were shook to see so much glam in one post. Model Bella Hadid chimed in to tell Kourtney, “ur likeeeee realllyyyy pretttyyyyy,” while The Real cohost Adrienne Bailon said, “Perfection.” Even family friend Larsa Pippen added compliments to the pot and said, “The all look,” followed with a fire emoji. We’re glad the decision as to what to wear was ultimately up to Kourtney because honestly each of these looks were too stunning to choose a true favorite!

Kourtney’s post comes after she posted a multitude of photos from the annual family holiday gathering that included one of her snuggling up next to on-again, off-again beau Younes Bendjima, 26. The sexy model looked cozy as he held her waist while they posed for the camera amid a romantic backdrop that included a very big Christmas tree. Although the photo was towards the back of the set, eagle-eyed fans took notice of what was going on the instant they clicked on the glimmering photo. “Yessss Younes is back,” one fan wrote while another chimed in with a literal fact of, “Younesssss in da houseeee.”

Although Kourtney and Younes have reportedly been dating for months now and have been seen out and about at places like Disneyland and in Miami on Dec. 5 during Art Basel, fans are super excited see to this beautiful couple confirm that they are back together.

Their fans are so happy to see them thriving and they’re excited to see where things between Kourt and Younes go this coming year!