“We did this theme of … of all-white Whoovile was the theme of our Christmas eve party last year,” said Kim Kardashian during her Dec. 17 appearance on The Ellen DeGeneres Show. Kim, 39, explained her unconventional holiday decorations, telling Ellen DeGeneres, 61, that she hired an artist from Australia to create the geometric, Dr. Seuss-ian objects now filling her home. They cost a pretty penny, and Kim said that this deconstructed Whoville “will be our theme every year – well, this year, my kids are old enough that they’re climbing on them and ripping them and breaking them. I don’t know how long they’ll last.”

It wouldn’t be Christmas without some wanton destruction at the hands of some adorable tots. Some fans would probably want Kim’s kids to tear down the decorations, judging by the mean comments they said online. “Kim is extremely sensitive and she is not a fan of people calling out their feelings about her design or fashion missteps on social media,” a source close to Kim told HollywoodLife EXCLUSIVELY after fans dragged her decorations online. However, though she’s sensitive, she’s not going to take them down. “She likes it and thinks it looks cute as it is.”

Speaking of which, Kim went into how this year’s Christmas card is just her family – Kim, Kanye West, 42, North West, 6, Saint West, 4, Chicago West, 1, and 7-month-old Psalm West. “Normally, it’s the entire family,” said Ellen. Kim explained that she couldn’t wrangle everyone (“It was a time thing”) together for a giant Kardashian-Jenner holiday extravaganza, and she decided to just shoot her own family. However, even that was a headache. “It’s the most anxiety to get four kids together, smiling in a room – North was having a day, so she refused to be in the shoot.”

“She was crying because she wanted a specific hairstyle,” said Kim. Instead of dealing with her “dramatic” daughter, Kim told North that they will shoot the card without her. At first, North was okay with that, but after sleeping on it, she had a change of heart. “The next day, she woke up and was like, ‘Mommy, I really want to do a card.’ ” Kim called back the photographer, arranged a quick shoot, and had the photographer edit North into the Kardashian-West Christmas card. Yes, North was photoshopped into the shot. “There’s always one,” Kim said. 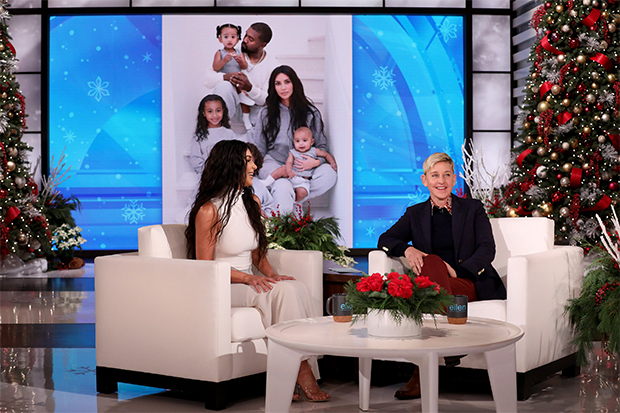 Now that Kim got North into her family’s holiday card, can she use some of that Christmas magic to patch up things between her sisters? Kim confirmed to Ellen that she and Kourtney Kardashian are currently on the outs due to Kourt, 40, no longer wanting to be a part of Keeping Up with the Kardashians. Kim revealed that when one member of the family takes a vacation or is busy working, the rest of the KUWTK cast pick up the slack, so the show has content.

Like coworkers at a restaurant, Kim and Khloe Kardashian, 35, have covered Kourt’s shift, which has admittedly left the younger Kardashian sisters feeling worn out and frustrated. “We’ve come to the conclusion that [Kourt] will film a little bit – well, I don’t know if we’ve come to a conclusion, actually,” said Kim. Better tune in to Season 18 of Keeping Up to find out.