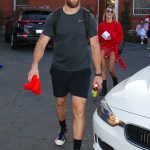 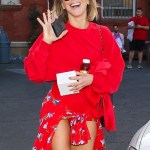 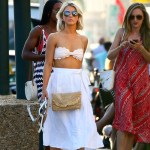 In a new interview, Julianne Hough expanded on a comment she made back in August that she considers herself ‘not straight.’ The pro dancer explained her sexuality even further, and revealed her admission was more about love than a label.

Julianne Hough opened up even further about her sexuality after she expressed that she is “not straight” in a cover interview with Women’s Health back in August. “For me, that comment specifically, was basically to say, ‘I love everyone!'”, the 31-year-old “Transform” singer told People Now on December 3. Julianne’s brother, fellow pro dancer Derek Hough also joined her for the interview, and admitted that his sister’s comment was partly misconstrued.

For Julianne, “I’m a person who thrives off of flow instead of absolute certainty,” she said, noting, by doing that, “It gives me a lot of freedom.” She continued, “You know, sometimes you feel confined by your own shackles, right? So, the more I feel like I express, it doesn’t carry any weight for me holding me down.'”

Julianne’s interview with Women’s Health certainly made headlines — not only for her candid comments — but, for her completely nude cover. The dancer proudly posed bare for the magazine’s “Naked and Strength”.  She began the interview by admitting that she told her husband, NHL star, Brooks Laich that she’s “not straight.” — Something she said to her husband four months into their marriage. The two wed in July 2017.

Julianne went on to admit that she was nervous to share the intimate detail with her then new husband. “I was connecting to the woman inside that doesn’t need anything, versus the little girl that looked to him to protect me,” she explained in the August profile. “I was like, ‘Is he going to love this version of me?’ But the more I dropped into my most authentic self, the more attracted he was to me.”