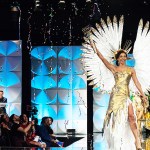 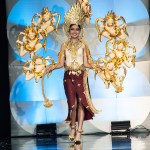 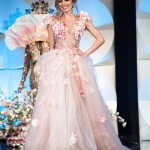 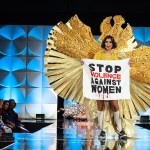 Two days before the 2019 Miss Universe competition, contestants from all over the world donned their national costumes while taking the stage in a preliminary round.

You never know WHAT you’re going to get when the Miss Universe contestants show off their national costumes, and in 2019, the looks were inspired by the ladies’ home countries and cultures! The National Costume competition took place on Dec. 6, two days ahead of the actual Miss Universe competition on Dec. 8. All of the pageant queens rocked ensembles that represented their homes, and they proudly strutted across the stage to show off the looks. The competition offered a mix of both bold and more classic looks, and everyone looked absolutely stunning.

The 2019 Miss USA winner, Cheslie Kryst, 28, was the perfect representation of the United States when she took the stage. Cheslie wore in an incredible goddess-like gown designed by Martin Izquierdo, and, upon closer look, the costume took inspiration from a number of iconic American symbols. The decadent and angelic wings reference Maya Angelou‘s classic novel I Know Why The Caged Bird Sings, the crown and torch are a nod to NYC’s Statue of Liberty, and the headband is a call to World War II icon Rosie the Riveter. The formally trained lawyer the look with perhaps the most fitting accessory possible: the scales of Lady Justice! “[The Statue of Liberty] speaks to freedom…[and the book stands for] creativity and authenticity,” the Charlotte, North Carolina native said in an interview with The New York Post.

One of the wildest looks of the night, though, came from Miss Canada, Alyssa Boston who rocked an elaborate green outfit inspired by marijuana. The ensemble was inspired by the iconic outfits worn by Las Vegas showgirls, and fitting given the 24-year-olds’ advocacy work around legalization. Miss Albania Cindy Marina, 21, also wore a bold look that reminded us of the elaborate clothing worn by Asgardians in the Chris Hemsworth film Thor! Rocking a sexy black mini and over-the-knee boots, she kept the camp coming with a red cape, gold headpiece and costume-worthy gold necklace. Miss Laos Vichitta Phonevilay also turned heads as she transformed herself into a massive elephant that appeared to be inspired by a Trojan Horse!

Contestants from 90 different countries are competing in Miss Universe 2019, and with so many amazing contenders, the competition is tougher than ever. Once again, Steve Harvey will be hosting the event, which airs on FOX at 7:00 p.m. on Dec. 8. Sitting in the judges’ chairs will be Gaby Espino, Paulina Vega, Bozoma ‘Boz’ Saint John, Cara Mud, Sazan Hendrix, Crystle Stewart and Riyo Mori.

Click through the gallery above to check out the amazing national costumes from this year’s preliminaries, which also included a swimsuit competition. On Sunday, we’ll see a select group of women in evening gowns for yet another phase of the competition. It’s going to be an amazing night!