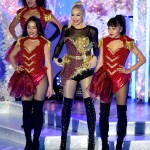 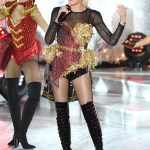 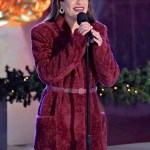 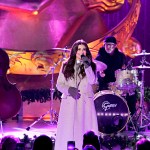 The annual ‘Christmas In Rockefeller Center’ is back once again. Gwen Stefani, John Legend, and more of your favorite stars are getting into the holiday spirit for the iconic Rockefeller Christmas tree lighting.

NBC’s Christmas In Rockefeller Center is something we all look forward to each and every year. The Rockefeller Christmas tree is one of the most iconic symbols of the holiday season in New York City. This year, some of the biggest names in music will be performing during the holiday special. Gwen Stefani, John Legend, Chicago, Brett Eldredge, Derek and Julianne Hough, Jon Bon Jovi, Idina Menzel, Lea Michele, NE-YO, Straight No Chaser, and Zoey’s Extraordinary Playlist stars Skylar Astin and Alex Newell will perform. Viewers will be treated to a holiday performance of the cast of Mean Girls on Broadway before the tree lighting gets underway.

Gwen dazzles in a gorgeous black, red, and gold costume that looks like a stunning Christmas present! Her fellow Voice coach John looks cozy in a tan coat as he belts out a holiday tune. Brett is dapper in a teal velvet suit coat. When you’re performing holiday-themed music, you have to dress the part, too!

Today anchors Savannah Guthrie, Hoda Kotb, Craig Melvin, Al Roker will host the holiday special. They’ll take us through the special and will be there as the legendary Rockefeller Christmas tree is lit in Rockefeller Plaza. Saturday Night Live stars Aidy Bryant, Michael Che, Colin Jost, and Kenan Thompson will appear during the festive special as well as Miss America 2019 Nia Franklin and the Radio City Rockettes. Christmas In Rockefeller Center is perfect for the whole family to enjoy.

The tradition of the Rockefeller Christmas tree goes back to 1931. The first official tree-lighting ceremony occurred two years later in 1933 in front of the then 8-month-old RCA Building (the current Comcast Building). NBC televised the tree lighting for the first time in 1951 on The Kate Smith Show and as part of the nationwide Howdy Doody television show from 1953-55. The 87th annual holiday special will celebrate the lighting of a 77-foot tall, 46-foot wide Norway Spruce from Village of Florida in Orange County, New York. The tree weighs approximately 12 tons and is approximately 70-75 years old. The tree will be decorated with 50,000 multi-colored LEDs and will be topped with a stunning Swarovski star.