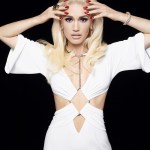 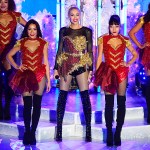 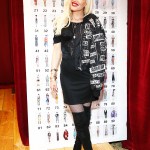 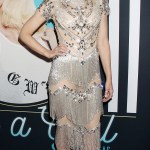 Gwen brought all the holiday cheer and dazzle for her performance in New York City on Thursday, Nov. 14!

The countdown to Christmas is officially on! Gwen Stefani, 50, looked absolutely gorgeous as she performed some holiday ready tunes in New York City on Thursday, Nov. 14. The Voice judge hit the stage to pre-tape performances for the Rockefeller Center’s annual Tree Lighting Ceremony and stunned in a red-and-gold sequin mini! The dress featured mesh details on top, and she paired the sexy holiday outfit with sequin over-the-knee boots by Christian Louboutin and burlesque-inspired fishnet tights! We’re going to guess fiancee Blake Shelton, 43, was loving this entire ensemble.

With her blonde locks in a slick pony tail and her signature red lip, Gwen performed the classic tune “White Christmas” as well as her own holiday track “You Make It Feel Like Christmas” off her 2017 album as per posted videos on social media. Her dancers were on point with the theme too, rocking mini-dresses inspired by The Nutcracker! For a second set, where she performed “Hollaback Girl” and “Sweet Escape,” Gwen changed up her look with a full silver sequin jacket worn as a mini dress and another pair of matching over-the-knee boots. The mom-of-three was all smiles during both sets, and the lavish sets and decor looked like a Christmas fantasy

The tree lighting ceremony is an annual event in New York City that dates back to 1931. This years’ tree is a Norway Spruce, which arrived to the Big Apple from the village of Florida in NY’s Orange County. The tree — which will be on display until Jan. 14, 2010 — is topped with a Swarovski crystal star and decorated with 50,000 colored lights! The tree will be lit up for the first time via NBC’s televised broadcast on NBC Wednesday, Dec. 4.

Gwen’s had a busy last 24 hours, as she was just out at the Country Music Awards in Nashville on Wednesday, Sept. 13! Gwen was out supporting her man Blake, who won Single of the Year for “God’s Country” — which he also performed.