Tyler Cameron may have split from Gigi Hadid earlier this year, but that isn’t stopping him from hanging out with one of her closest friends, Kendall Jenner! The duo was in the same group of people while attending the Los Angeles Rams vs. Baltimore Ravens game on Nov. 25, along with fellow Bachelor Nation stars, Dylan Barbour and Peter Weber, KarJenner pal, Stassie Karanikolaou, and more. Interestingly, this outing comes just three days after Tyler and Stassie were rumored to have gotten flirty during a night out in West Hollywood.

The pair attended the Los Angeles Clippers game before hitting Hyde Club on Nov. 22, where they reportedly were “showing a lot of PDA,” according to E! News. “He was holding her. They were whispering in each other’s ears and talking the entire night. It was very apparent they were into each other. Tyler leaned in and kissed her neck at one point, and also definitely kissed her cheek in public.” In photos from the Nov. 25 Rams game, Tyler and Stassie didn’t show any obvious PDA like this, but they were most definitely in the same group at the event. In one pic, Tyler couldn’t take his eyes off Stassie as she greeted others in the crew.

Afterward, Tyler headed to Poppy Nightclub, where he was photographed in a group of people that included Kylie Jenner. Although Stassie wasn’t in the pics, it’s likely that she was amongst the friends who joined them. Could something be brewing between these two!? 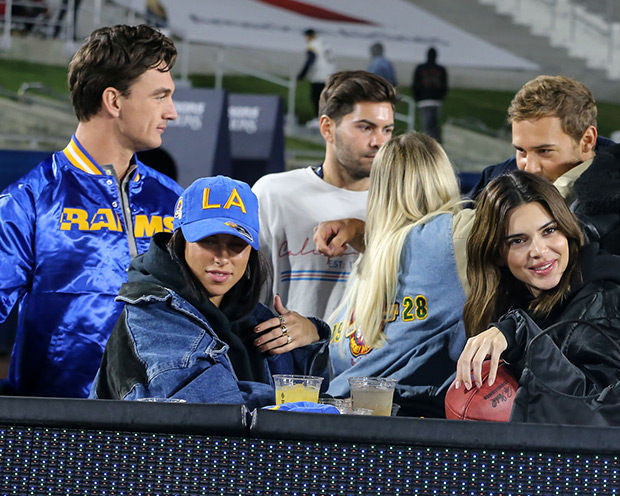 Tyler has had quite a whirlwind few months since The Bachelorette aired its finale in July. Of course, he was left heartbroken by Hannah Brown on the show, but after a few months, he definitely recovered! Just days after the finale, he was photographed hanging out with Gigi Hadid in NYC, and they were practically inseparable for the next two months. In fact, Tyler even traveled overseas with Gigi’s family to attend her grandmother’s funeral in September. The fling was fairly short-lived, though, and eventually fizzled out by the beginning of October. It sure looks like Tyler is doing okay now, though!