The West’s have stumped Wendy Williams. The talk show host, 55, can’t figure out why Kanye West would allow his first born, North West, 6, to wear a septum ring in her nose, yet she cannot wear makeup. The oldest daughter of the rapper, 42, and wife, Kim Kardashian, 39, rocked the fake facial bling while out with her parents on Sunday, November 17 at Joel Osteen’s church service in Houston, Texas.

“He doesn’t want his daughter wearing makeup, but she can wear a full-on nose ring? So, where are we going with this?”, Wendy questioned during her Hot Topics segment on Tuesday. The host was clearly confused when she saw new photos of the little fashionista sporting the septum ring.

This isn’t the first time North has donned the nose jewelry. In July, she showed off a different nose ring at her grandmother Mary Jo “MJ” Campbell‘s 85th birthday party. At the time, Kim clarified to inquiring fans that the accessory wasn’t the real deal. “Fake nose ring alert!!!” the mom of four wrote over a photo of North posing alongside her cousins, Penelope and True with aunts Kourtney and Khloe Kardashian. 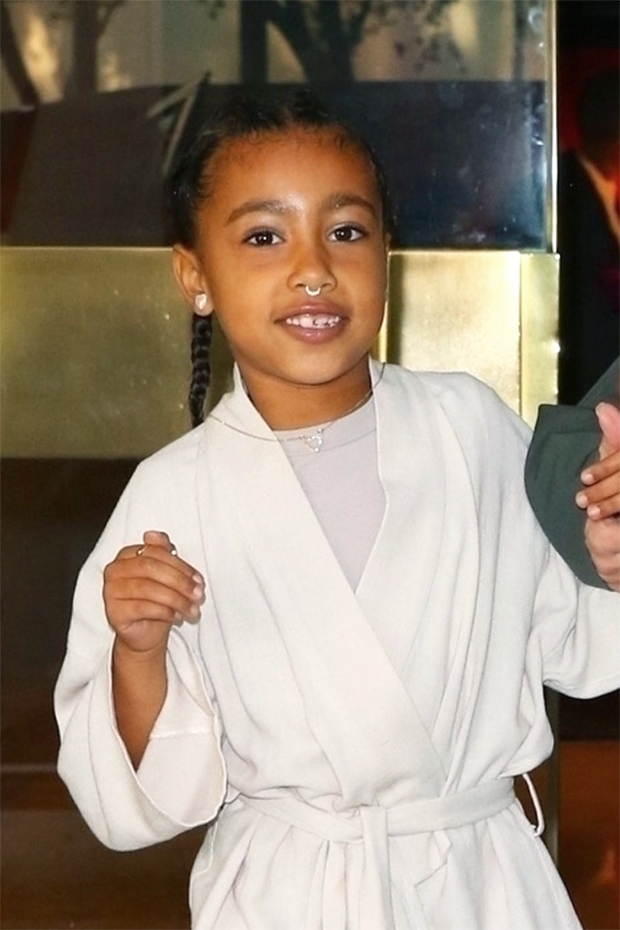 Kim revealed at NYFW in September that Kanye put a stop to North’s makeup use until she’s a bit older. Before that, the sassy youngster was donning bright eye shadow and glossy lips on many occasions, which she sought inspiration from her mother, who is the successful founder of KKW Beauty. Kim just launched the brand in ULTA cosmetics stores.

“I think he had it, he changed all the rules,” Kim told E! News of Ye’s new no makeup policy in a September interview. “I’d let her wear, you know, she has a little red for Christmas, I’d let her wear a red lip, or I’d let her do one pop of something. I’d let her, if she’s wearing a black dress, a black lip.” And, because of her leniency with North’s glam, Kim admitted that she landed in hot water with her husband.

“So, I kind of got in trouble for that,” she confessed. “So, it’s now no more makeup.” Luckily, Kim did admit that North is “absolutely” still allowed to “weigh in” on fashion.

Despite Ye putting his foot down, Kim recently admitted that her daughter has been trying to get back into makeup, — an issue that’s caused a big tiff in the West household.

“North is trying to get in on the makeup but she’s being blocked heavily because her dad has stopped all makeup for her until she is a teenager,” Kim told E! in a separate interview published on October 24. “It’s a big discussion, a big fight in the household right now but it is what’s best,” she admitted.

“I think as a parent you just learn and figure it out as you go and we realized we didn’t really want her to wear makeup at a young age but she sees her mom putting on lipstick and lip gloss,” the Skims founder continued.