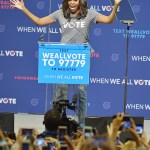 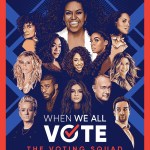 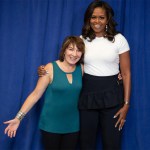 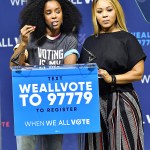 We’re less than a year away from the 2020 presidential election, and Michelle Obama wants to get YOU registered to vote. HollywoodLife is partnering with the former First Lady and so is an army full of stars.

As First Lady of the United States, Michelle Obama had a first-hand view for eight years of what happens when people exercise their democratic right to vote. They elect a President, Senators, House of Representatives members, Governors and state and local officials, who make policies and laws that affect the lives of every American — hopefully, in a good way. Now, she is passionate about making sure that YOU exercise your democratic right to vote and have a say in what your country is doing for you. To ensure that, she’s launching her second “When We All Vote” campaign today, November 7, and HollywoodLife is one of her partners. We, too, feel that it’s critical that all of you who are our readers and are eligible to vote, get your chance. The first step is getting registered to vote now or as soon as possible, so that you don’t miss any deadlines for the November 2020 election.

Mrs. Obama first launched her successful “When We All Vote” campaign for the 2018 midterms and registered thousands of new voters. Her efforts, along with activist efforts across the country, were effective in setting off a huge blue wave of voters and the Democrats took control of the House of Representatives, amassing a majority of 235 seats.

As Michelle Obama says in the video above, “Millions of new voters made their voices heard for the first time. Now the stakes are even higher and we are looking to you. Our country–our democracy–is counting on you.” Adds co-chair Rita Wilson, in an exclusive statement to HollywoodLife, “I vote because I’m a first generation American whose parents sacrificed their lives to live freely in America, recognizing that democracy is never to be taken for granted.” “When We All Vote” is a totally non-partisan organization and is determined to increase the participation of Americans–particularly young people, in going to the polls and voting.

Mrs. Obama, her co-chairs and ambassadors will be appearing at voting registration rallies in coming months and will be leading efforts to register college and high school students to vote. As well, they will be focusing on registering members of minority communities, so they can close the race and age voting gap. It doesn’t matter whether you are a Republican, Democrat or Independent, Michelle and HollywoodLife want you to register to vote and then actually go to the polls on November 3, 2020 to cast your ballot.

You can actually register to vote by clicking here. “When We All Vote” will walk you easily through the get -registered steps.

Remember that Americans went to war for their independence and the right to vote in 1775, so don’t give up this critical way to make your voice heard. Mrs. Obama is hoping that you will organize your own ‘Voting Squad‘ of your friends and families to get registered and then go to the polls next November 3. As co-chair, Janelle Monáe says, “It all starts with you.” Selena Gomez agrees: “You are the only person”…”when we make our voices heard.” And Faith Hill adds, “When we all vote.”

For more information, go to whenweallvote.com and stay tuned to HollywoodLife for all our coverage of “When We All Vote”s events and initiatives and our own coverage of the 2020 election. Get registered and get ready to vote!