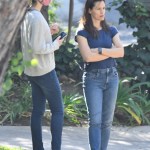 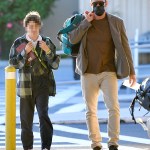 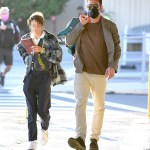 Ben Affleck, 47, and Jennifer Garner, 47, could write the book on co-parenting. The exes were spotted taking their kids Violet, 13, Seraphina, 10 and Samuel, 7 to school on Halloween morning and they were all smiles for the outing! They looked friendly as ever as they smiled and chatted with each other, as Jen sipped on a coffee or tea and Ben flipped through is phone. Bennifer 2.0 may not have been wearing costumes, but they certainly looked cozy for the morning stroll: Jen was casual in black yoga pants, turquoise sneakers, a blue hoodie and a cap, while Ben was a little more dressed up in a chic gray coat and jeans — perhaps they didn’t want to outshine their kids?

The Halloween spirit was alive and well with the their offspring, and we were particularly loving 13-year-old Violet’s look! Jen’s mini-me opted to dress as the Joker — a hot choice right now with the Joaquin Phoenix film — but took her inspiration from the cartoon with a green wig, striped pants and purple jacket. 10-year-old Seraphina transported us to another time as a 1700s British solider, complete with a velvet blazer and navy hat! Little Samuel kept things simple with a box garbage truck and bright orange safety vest.

While Jennifer didn’t dress up this morning, she was in full costume on her Instagram account on Wednesday, Oct. 30! The “13 Going On 30″ star took inspiration from her commencement speech at Denison University in Ohio — her alma mater — where she said, “When it comes to Halloween costumes, go funny over sexy. Why would you dress like a flirty nurse when you could be a mailbox?”

Jen did just that, and revealed she was going as a U.S. Postal Service mailbox! “Live your truth, people. Happy Halloween” she captioned the video set to the season’s go-to jam “Monster Mash.”

Earlier this week, the family appeared to be counting down to Halloween as they — Ben included — appeared to be decorating Jennifer’s house! Seraphina and Samuel could be seen standing on the porch as Jen carefully placed down a carved Jack-o-Lantern. The sighting was a surprising one for Ben, who was seen partying just hours before at the Unicef Masquerade ball at La Peer Hotel in West Hollywood.