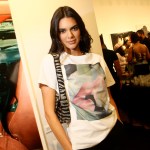 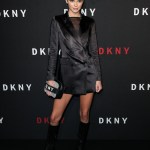 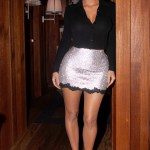 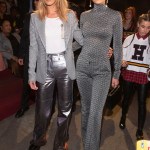 Sofia Richie’s run at NYFW continues! On Sept. 9, she hit up the Alice + Olivia show, where she showed off a much plumper pout while posing for photos.

After spending a lot of time with Kylie Jenner this summer, Sofia Richie seems to be picking up on some of the makeup mogul’s beauty techniques! Sofia showed up to the Alice + Olivia show at New York Fashion Week on Sept. 9 with a super plump pout, which she covered in stunning pink lip gloss. We’ve seen Sofia enlarge her lips before, but she was showing them off more than ever with liner and thick gloss this week! Sofia looked fierce at the Alice + Olivia event, where she wore high-waisted white shorts, a white top and an oversized white blazer.

The ensemble put Sofia’s toned and tanned legs on display. She completed her beauty look with her hair parted down the middle and styled sleek and straight. Sofia has been rocking longer hair extensions throughout her time at NYFW, and they looked fabulously styled once again. Over the weekend, the 21-year-old’s boyfriend, Scott Disick, was in NYC to join her for some of the festivities, but she was back to hitting up events solo on Monday.

Also in attendance at the Alice + Olivia event were stars like Delilah Belle Hamlin, Paris Hilton, Nicky Hilton, Camille Kostek, Victoria Justice and more. Tons of celebs and models are in New York City for NYFW this week, and all of the events have turned into the ultimate star-studded affairs.3

Sofia’s appearance at the shows comes after a pretty wild summer. She accompanied Kylie Jenner and some friends on a trip to celebrate the launch of Kylie Skin in July, and then went on a lavish European vacation with Kylie, Scott, Travis Scott, Kris Jenner and more to celebrate Kylie’s 22nd birthday in August. Then, she celebrated her own birthday on Aug. 24, and since it was her 21st, she had a wild weekend in Las Vegas. What a life!