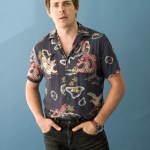 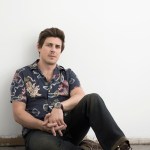 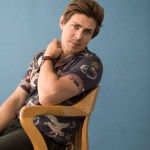 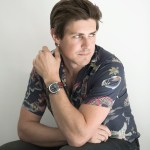 After another standout season of the Netflix hit ‘Glow’, Chris Lowell stopped by to EXCLUSIVELY talk about the ‘high stakes’ in season 3 & where he sees the show going in season 4. Plus, is Piz poised to return to ‘Veronica Mars’?

By now, if you’re a serious GLOW fan, you’ve binge-watched the new season on Netflix, and are filled with a cavalcade of mixed emotions. What will surely be remembered as the show’s most intense season to date, GLOW pushed the boundaries once again by mixing the razzle-dazzle world of women’s professional wrestling with the genuinely heartfelt stories of the complicated characters within it. The team had shipped off to Las Vegas to perform their popular show in the main ballroom of a high-rolling Fan Tan Hotel & Casino, and everyone is faced with unforeseen obstacles. Arguably, the member of the GLOW team that goes through the biggest transformation is Bash, producer and financial backer of the wrestling show and man plagued with uncertainty about who he really is. Now that the dust has settled on season three, Chris Lowell was kind enough to break down the season’s biggest moments for Bash and what he foresees his character’s future will be.

“We knew it was going to be a different tone if only because the setting was so different,” Chris explained about season three, “but I don’t think any of us realized how much dramatic work [creators] Liz Flahive and Carly Mensch were going to give us. That was a real gift. What I love about it is it really feel likes the stakes are all so high for everybody; all of the questions that they’re asking themselves, and roads diverged in a wood that they’re having to choose between, it felt so relatable and so significant.” For Bash, the questions mostly focused on the facing the reality of his sexuality. For the last two season, it has been hinted at that Bash was struggling with an attraction to men through several key scenes, including one concerning the death of his companion Florian from AIDS. However, at the end of season two, Bash marries wrestler Rhonda, played by Kate Nash, and the situation gets even more complicated.

“It’s a very unique kind of bizarre relationship that you don’t normally see,” Chris explained about Bash and Rhonda’s quickie marriage. “But I think it’s so special. That’s kind of what’s so amazing about it: there’s this real connection that they have that is not romantic, but also not strictly platonic and isn’t a conventional husband and wife relationship. But at the same time, there is this deeply felt genuine love and a real sense of wanting to be the best version of yourself for the other person. It’s a very specific dynamic that that they have at the end of the season. It’s one that I just thought was so compelling and unusual. You just don’t see relationships like that very often.”

That dynamic is ultimately tested at seasons end when Rhonda tries to seduce Bash through jealousy. She invites the casino gigolo, Paul, back to their penthouse to simply flirt with her, hoping it will stir the possessive side of Bash. Her plan works, though not as she expects. She ends up in bed with both Bash and Paul, and her husband finally gets to have a sexual experience with a man.  While the threesome scene was a buzzed-about moment for season three, it’s really just the first step in Bash’s journey to defining his sexuality. “I think it would be a disservice to have Bash have one homosexual experience and then wake up the next day and be like, ‘I’ve figured it out,'” Chris said.

“I don’t think there’s any clean or simple resolution for him in this exploration of who he is and what he knows and understands about himself. With something as complicated as coming out, especially coming out in the 80s, especially coming out in the 80s in a conservative family amidst the backdrop of the AIDS crisis and in a homophobic community, the stakes are just so incomprehensibly high.” As for shooting the scene itself with Kate and Nick Clifford, while Chris admits it was ‘nerve-wracking’, but ultimately, it was a risk he was willing to see his character take. “I was excited for the challenge and I feel so safe with Kate and I think she does with me,” he said. “We’re a really good team. It was something that there’s no one with whom I’d rather tackle it than her. And then Nick, who plays the gigolo on the show, is also just an angel and a very just good human being. We were in the presence of good company the whole time and that makes it easier to take some of those risks.”

With season 3 in the books, looking ahead for Bash’s future seems a bit daunting, especially given that the moment, Neflix has yet to greenlight a fourth season (though with a slew of Emmy noms and a rapid fanbase, they’d be crazy not to). For Chris, a fourth season will hopefully have 3 things: ‘any excuse’ to act alongside Betty Gilpin, more “interesting, unusual” character direction for Bash, and a chance to start wrestling! “It’s so funny,” Chris said. “Every season, we talk about Bash getting in the ring. Literally every season ends with Liz and Carly saying like, ‘All right, get ready for next season, because we’re probably going to throw you in the ring for a match.’ And every season that never comes. I’m game for it. I would love nothing more. I get so jealous when I’m sitting there at my little table watching everyone do these insane physical stunts. It’s just such a beautiful physical ballet to watch and I always want to participate in it. And so yeah, I’d be down if they threw me in the ring.”

“We’ve talked about all sorts of fantasy versions of it,” he added, “whether it’s Bash in drag… One thing I think that’s so interesting about wrestling in general is, especially when you think about, there’s a lot of ingrained homoeroticism in just wearing makeup and it being so physical and so much about these different personas and physiques. There’s already such an element of that in the sport itself that it kind of feels like an inevitability that Bash would find himself there.”

While GLOW fans will have to wait and see if Bash makes his way into the ring, another fandom is also at the edge of their seat to see if another of Chris’ beloved characters will resurface on another show. This summer, Veronica Mars returned to the zeitgeist in the form of a reboot show on Hulu. It follows the events of the Kickstart-funded movie, with Veronica Mars back working as a P.I. in Neptune, CA and living with her boyfriend, Logan.  While many are Team Logan, there is still a very fervent Team Piz fanbase, all of them praying for the return of Chris as Veronica’s ex in the next season — especially given [SPOILER ALERT] Logan was killed at the end of this season.

“They’re going to fucking blame it on me,” jokes Chris about the shocking twist in the Mars storyline. “[Veronica Mars creator] Rob Thomas and I had talked about the fourth season and we both agreed that there really just wasn’t a place for Piz to come back to. Like, why do we need to see him again? He served his purpose of being the divisive figure between Veronica and Logan. So, at this point she’s chosen Logan for sure, so his sort of purpose on the show is kind of irrelevant… But Logan’s dead as a doornail! So it looks like Piz has his day. Piz is the one that’s walking around, sucking air!”

Whether he will be ‘sucking air’ in the vicinity of Neptune remains to be seen — but it doesn’t sound like Chris is against it!