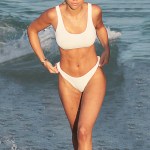 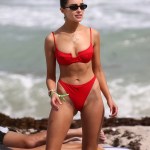 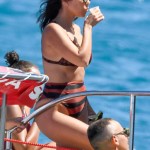 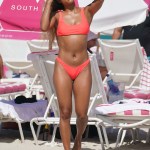 Lea Michele sizzled on the beach in Hawaii when she hit the sand in a perfect, pink bikini that flaunted her impeccable abs. Her six pack is enviable!

Lea Michele took a much needed break from filming Same Time, Next Christmas on August 21 to hit the sand and surf. The Spring Awakening star, 32, rocked the cutest (Rachel) berry-colored bikini while walking on the beach in Turtle Bay, located on the famed North Shore of the Hawaiian island of Oahu. That bikini looks like it was made for her. The shelf bra top and boyshort bottoms totally showcase Lea’s rock-hard, six pack abs, as well as her toned arms and legs. It’s perfect! Accompanying her on her stroll outside the luxurious Turtle Bay Resort was her mother, Edith Sarfati, who looked damn good in her striped bikini, too. It’s clear where Lea gets those abs from.

It’s been 10 years since Glee premiered, and Lea and the rest of the cast have come so far since their first time getting slurpees to the face in the hallways of McKinley High. Lea’s living a life that Rachel Berry could only dream about. She’s released two studio albums, toured with her former co-star, Darren Criss, and starred in movies like New Year’s Eve, and sitcom The Mayor . Plus, she starred as Hester in Glee creator Ryan Murphy‘s horror comedy Screen Queens. Six years after the tragic death by overdose of her fiancé, fellow Glee star Cory Monteith, Lea married her boyfriend of almost two years, Zandy Reich.

Lea and Zandy’s wedding was magical! After an almost year-long engagement, the happy couple wed in a romantic ceremony in Northern California. She shared photos for weeks leading up to the festivities, including from her bridal shower, bachelorette party, and plenty of shot of her 4-carat diamond engagement ring. The best part of the wedding was how radiant and blissful Lea looked.

Lea is definitely in the running for best celebrity bikini body of 2019 — and so are ladies like Sofia Richie, Kourtney Kardashian, and Miley Cyrus. Scroll through the gallery to see them, and more!