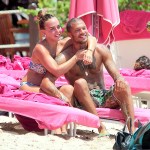 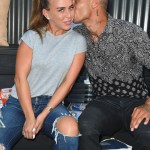 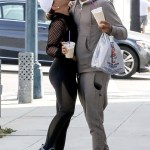 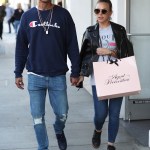 Jeremy Meeks, a.k.a. the Hot Felon, and Chloe Green are calling it quits. The couple, who share a son named Jayden, has reportedly split after 2 years together.

Jeremy Meeks, 35, and Chloe Green, 28, are over. “They split about two months ago, but are off and on still speaking,” a source told Us Weekly. Chloe is currently selling their London home. The announcement of their split comes just a few days after Chloe was spotted kissing a mystery man on a yacht while on vacation in the Mediterranean on Aug. 10. All seems to be well between the exes at the moment. When the Topshop heiress, daughter of billionaire Sir Philip Green, posted an Instagram photo on a yacht with model Joan Smalls and magazine editor Vas J Morgan, Jeremy commented, “Have fun.” HollywoodLife has reached out to Jeremy and Chloe’s teams for comment.

Jeremy and Chloe first started a relationship in the summer of 2017. At the time, Jeremy was still legally married to his ex, Melissa Meeks. Jeremy and Chloe were spotted on a number of vacations in 2017 and were not shy about PDA. The couple welcomed their first child together, Jayden Meeks-Green, in May 2018. Jeremy also shares a son and stepson with Melissa.

Rumors swirled of a possible engagement in 2018 after Chloe started wearing a massive diamond ring, but nothing was ever confirmed. Rumors of a split began plaguing the couple in 2019. Jeremy denied rumors of a split in Feb. 2019. Jeremy responded to breakup speculation again in May 2019 when he posted a sweet Instagram snap with Chloe. “We are still very much in love lol,” he wrote.

Back in April 2019, Jeremy told HollywoodLife EXCLUSIVELY how he handles nasty rumors. “There is always going to be people who try to chime in on your personal life when in all actuality they have no idea,” he told HL during an event at the Sunset Room in Los Angeles. “I would have to spend every day or the next year trying to defend myself and you just can’t do that…. Like doing interviews and state the actual facts because you would constantly be stating the facts and I would never be able to get any work done. So I just have to let it go and let it roll off my back and get on with my business and my family and just keep doing me and show them rather than tell them. I would rather show them.”