Comedian Sugar Sammy, whose real name is Samir Khullar, speaks several different languages, each with an impeccable accent, and translates his comedy into each one. While he is changing up his language for each audience, he also translates his jokes and cultural references, depending on the country he is performing in. While this of course makes sense, as people across the world have different senses of humor depending on their cultural influences, Sugar Sammy revealed to HollywoodLife.com the biggest contrasts between American and French societies — two audiences for whom he typically performs. “They are different places, different things that people laugh about, and I think that’s just cultural reference. When I talk to Americans about something that’s very foreign, there’s a disconnect, but same thing with France,” the Montreal native explained on the HollywoodLife podcast. “If I go to France, I write a show about them. It’s my job as a comedian to write a show and connect, to really make sure that it’s on target, it’s on point. I can’t just transpose my French show here in the US. I can’t just transpose even my Quebecois show, my French Canadian show, to France.”

Sugar Sammy just kicked off his US tour in Chicago, and is currently in New York City where he’ll be performing five shows at the famous Carolines On Broadway. “You’ve gotta build that bridge with your audience,” Sammy continued. “The French, first of all, if you compare them to the Americans, have no notion of good service, ever. You go to France. It feels like you’re disturbing the waiters. Whereas, the meanest person in America’s still nice and will give you the service you need…but ending their niceness with something shitty.” LOL, but is he wrong? No! 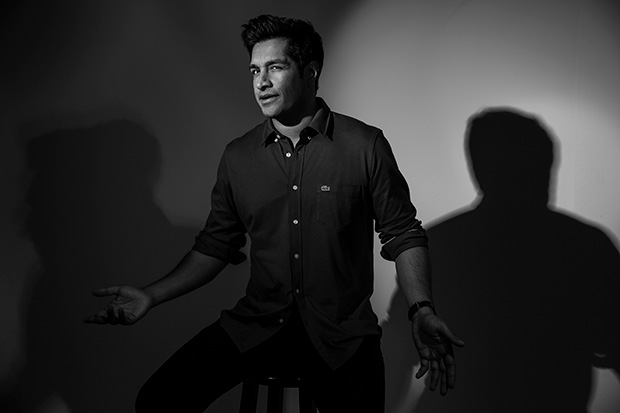 “But there’s a loudness to Americans,” Sammy added. “You’ve heard someone go, ‘All right, listen. Over there. Don’t turn right away. You’ll see there’s a f***ing guy there. You wanna avoid the f***ing guy.’ And you’re like, ‘We didn’t need to swear, there.'” Also a fact. To hear our interview on the HL Podcast with Sugar Sammy, and more of funny jokes, listen on iTunes. Also, visit Sugar Sammy’s website to find out if he’s coming to a city near you!