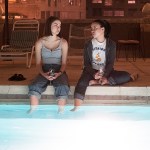 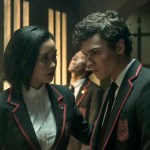 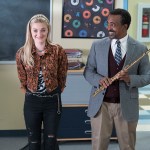 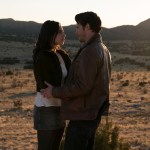 BET’s ‘Boomerang’, premieres on Feb. 12! The new comedy series is a continuation of the 1992 romcom of the same name! But, the cast tells HollywoodLife how the series separates itself from the film — and, how it has a ‘Friends’ element to it!

Boomerang will bring a fresh take on the 1992 Eddie Murphy romantic comedy of the same name to BET on February 12 at 10/9c. — We say this because the show’s witty and warm cast, made up of Lala Milan (Tia Reed), RJ Walker (David Wright), Leland Martin (Ari Thomas), Tetona Jackson (Simone Graham),Tequan Richmond (Bryson Broyer) and Brittany Inge (Crystal Garrett), exudes good energy as a unit, which is why it was understandable that they compared the reboot to Friends. The cast stopped by HollywoodLife‘s New York offices on February 6, ahead of Boomerang‘s Tuesday premiere.

Boomerang is executive produced by the film’s original star Halle Berry and actress Lena Waithe, who also co-wrote the 10-episode series. Waithe has been there every step of the way leading up to Boomerang‘s debut, RJ Walker said, praising The Chi star. “Lena was awesome, she’s very hands-on. She’s like a big sis and she really cares about the projects she’s involved in,” he explained.

The cast also emphasized that Boomerang is not a remake of the original. “It’s a continuation of the movie,” Lala Milan said, setting the record straight on conflicting rumors. “In the short, we’re always saying that it’s the ‘black version of ‘Friends’,” she added.

The original, which starred Berry and Murphy, and Robin Givens, is about a cocky ad executive and ladies’ man Marcus (Murphy), whose antics are challenged when he meets his new boss Jacqueline (Givens) — an executive who gives it right back to him. Berry played Jacqueline’s shy assistant Angela, who Murphy, aka, Marcus, eventually falls for.

The spinoff of sorts, is about Marcus and Angela’s daughter, Simone Graham, played by Tatona Jackson, and her life, career and relationships, as she, along with her friends try, to create their own legacies.

“The tagline is, ‘There’s more than one way to be black,'” Leland Martin said, explaining, “I think that kind of sums up the show.” Boomerang is described as a series that explores workplace dynamics, including gender roles, office politics, relationships and the conflicts between Generation X and millennials.

“Our characters come from so many different facets of the culture, which I think we (the cast) represent that culture throughout the show — between the characters and the nature of their lifestyles,” Martin continued. “It’s a wide range of personalities throughout this cast and the storylines are amazing too. We pay homage to the actually story, (Boomerang, the original). There are a lot of things that we bring back, but it’s not anything like the original. We’re not remaking the original.”

The cast met as a group for the very first time at the show’s initial rehearsal and table read, Brittany Inge revealed. Lala explained the obvious initial thoughts she and her peers had upon meeting for the first time. “It was new people from different backgrounds trying to get to know each other,” she admitted, adding that their chemistry is something that “grew over time.”

Brittany chimed in, admitting that “the desire to create chemistry was there immediately.” Everyone was on the same page from the jump. “We all wanted to be together, hang out, and get to know each other so we could create strong connections and relationships, so that we could convey best friendship on screen,” she explained. “I think we have a really family friendship,” RJ added. 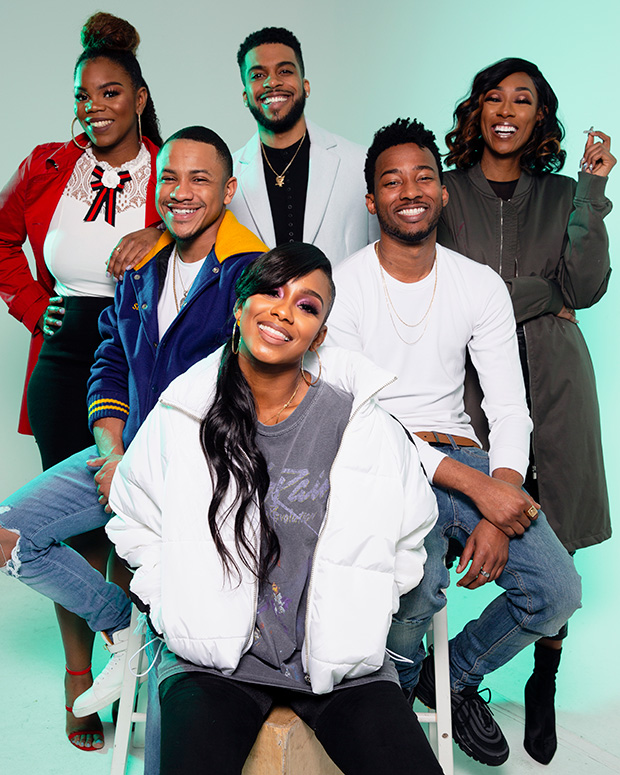 Lala Milan (Tia Reed) — “I started off working at Walgreens to All State and low key got fired, and became an Instagram influencer and now I’m on the TV screen!”

RJ Walker (David Wright) — “I came to LA in my third year of college. I just came to visit, and I ended up getting stuck there. I got discovered at a party and ended up landing commercials. I also studied theater arts in high school and college. After I continued to book commercials, I started to land TV guest spots on shows like ‘Castle’, ‘Baskets on FX’, and then I booked a reoccurring role in ‘Atlanta’, alongside Donald Glover. Now, I’m on ‘Boomerang’ and in a movie coming out with Amy Poehler.”

Leland Martin (Ari Thomas) — “I was actually working at Meryl Lynch, on my way to being a financial advisor. The job just wasn’t working for me — it just didn’t make my heart tick. I was in a little bit of a funk because of it. But, things turned around when I stumbled up on an acting class and I fell in love with acting. From there. I spent two years on the east coast, transferred to Bank of America and was working at night and auditioning in the days… I raised the money to go to LA, packed up my car, had no where to stay and was going for it. I built my team, started going on auditions. Did a digital series, ‘The Rookie on Lifetime, several national commercials and tv gigs, and my life has changed.”

Tetona Jackson (Simone Graham) — “I’ve been in entertainment since I was little. My dad is a musician. It’s always something I wanted to do. Prior to ‘Boomerang’, I did a show on Hulu, called ‘All Night’. A few movies, I was on tour with Disney on Ice, but was still a struggling actress, until I booked this show.”

Tequan Richmond (Bryson Broyer) — “I’ve been doing this all my life. My mom packed up in 1999 and drove across country and she waited two years to come get me because she was struggling so bad in LA. When she finally came to get me, they asked if I wanted to try acting… I booked my first seven jobs and other shows after that … years later, we’re here at ‘Boomerang’.”

Brittany Inge (Crystal Garrett) — “I am an actor and I went to Spellman College in Atlanta, where I studied music. I thought I was going to be a singer, but I started studying acting post-college and did some work on a lot of local Atlanta shows, like ‘Atlanta’… ‘The Resident’. I moved to NYC last August, but got an audition for ‘Boomerang’ in Atlanta, so I moved back!”