Talk about a beautiful young couple! Actor Timothee Chalamet, 23, and model Lily-Rose Depp, 19, have taken their love to Paris, where they were spotted getting cozy on a walk. The pair first revealed their romance in early October when photographed kissing in New York and their relationship has headed over to Lily’s native France, where the couple were spotted strolling arm-in-arm in the City of Light. The pair met while filming the upcoming Netflix movie The King which is based on several of William Shakespeare‘s historical plays. They play a couple onscreen, which turned into love off-screen.

It was impossible for paparazzi not to notice Timothee as he was dressed in a jacket the featured bold, bright blocks of hot pink, neon yellow and blue. Lily-Rose wore a burgundy turtleneck with a black down feather jacket and faded jeans. Even though it was a cloudy day in Paris, the two wore sunglasses.

As we previously told you EXCLUSIVELY, her dad Johnny Depp, 55, is thrilled with the pairing. “Johnny gives Lily a lot of respect and freedom, he thinks she’s brilliant and totally trusts her choices,” a source close to the Pirates of the Caribbean star revealed to us when the pair first got together. 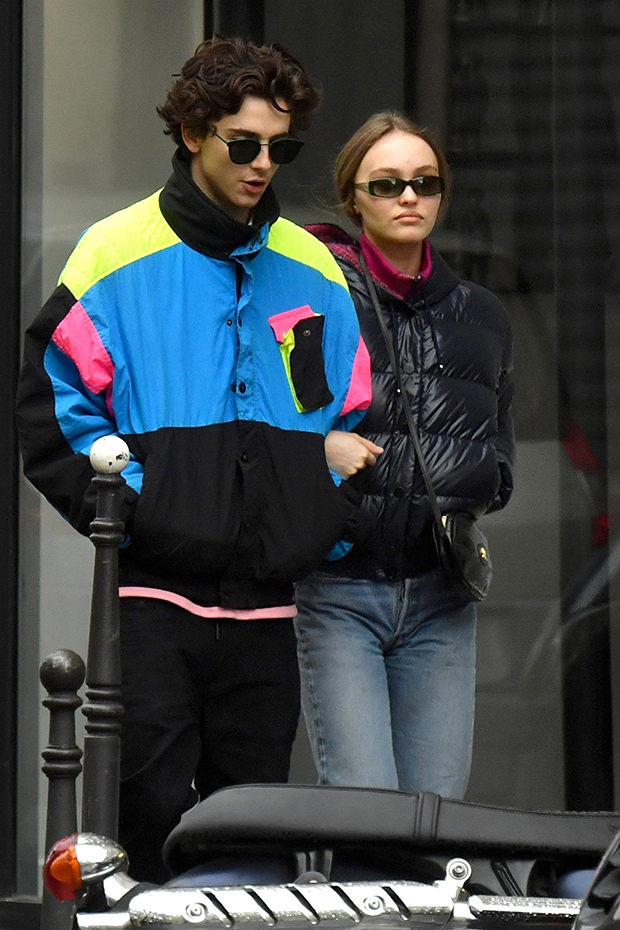 “She absolutely has his blessing when it comes to dating Timothee, especially because they both speak fluent French. Johnny is very proud that Lily’s bilingual so the fact that she’s found a boyfriend in America that she can speak French with is a big deal, that makes Johnny extra happy. It’s still a very new relationship and Johnny isn’t one to push himself into Lily’s life but when she’s ready to bring Timothee home, Johnny will welcome him with open arms.” Three months later and the pair is still going strong!