Do blondes really have more fun? Well, Julia Roberts, Selena Gomez and so many more of Hollywood’s hottest stars may argue yes! Over the years, several celebs have ditched their dark locks for some shade of blonde — whether it’s platinum or golden! Julia Roberts is one of the most recent stars to go blonde, showing off her new look at a TCA panel while promoting her return to the screen in Amazon’s Homecoming. Recall, in her days of Runaway Bride and Pretty Woman, Julia rocked her iconic frizzy curls and brown hair, but she traded them in for this golden blonde hue and we’re loving it!

Then, there’s Selena Gomez who debuted a bleached blonde look at the American Music Awards in fall of 2017. The drastic change was a huge contrast from her typical dark brown hair. Just as we were getting used to Sel’s new look, she returned to her normal dark hue. However, her friend Demi Lovato recently took a page out of her book and went *blonde* for the summer, just days before she was put in the hospital after an alleged overdose. Demi highlighted her long brown hair with pieces of blonde, to create a stunning honey color that’s perfect for the warm weather seasons! 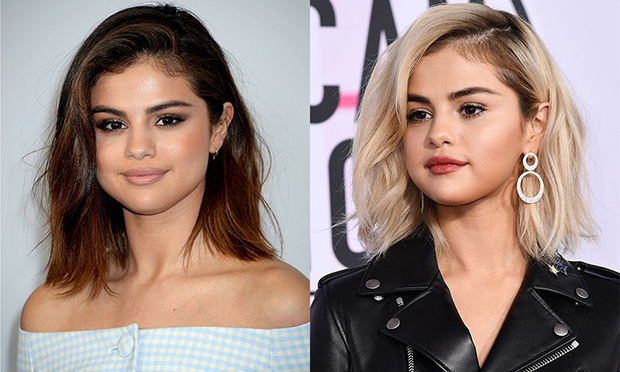 Now, it’s not only the ladies who have undergone blonde hair makeovers! Zac Efron showed off his blonde dye job while on set in February for his upcoming comedy Beach Bum, and he was totally unrecognizable! Then, Jared Leto ditched his iconic beard and long Jesus-like hair, and went bleach blonde while filming Suicide Squad in 2015. With his long brown hair also went his brown brows, as Jared also dyed them platinum blonde, as well. At that time, Kim Kardashian also debuted platinum locks, and the two were kind of twinning. Click through our gallery to see all of the celebs who have gone blonde!