Reba McEntire, 63, not only hosted the ACM Awards on April 15, but she took the stage toward the end of the show for a performance of her hit “Does He Love You'” with daughter-in-law Kelly Clarkson. The iconic country singer rocked a number of ensembles throughout the night, but it was her red dress from the performance that really had everyone talking — because it’s the same dress she wore to sing the song with Linda Davis at the CMA Awards in 1993. Reba looked well younger than her 63 years in the velvet ensemble, which featured a plunging neckline covered in sheer material.

The style of the dress made major headlines when Reba first wore it 25 years ago, since it left little to the imagination in the cleavage department. She rocked it just as confidently back then as she did now, and we cannot get over how incredible she looked onstage! “It fit,” she told Entertainment Tonight after the show. “I’m really pleased.” Although Reba and Kelly have performed “Does He Love You” together plenty of times in the past, this was a special moment, as it was a special tribute to Reba and followed a successful and hilarious night of her hosting the show.

Reba hosted the ACM Awards solo every year from 1999 to 2011. The next year, Blake Shelton joined her as a co-host. In 2013, Reba was replaced by Luke Bryan, who joined Blake to host the telecast for the next three years. Dierks Bentley and Luke then teamed up as hosts in 2016 and 2017 before Reba’s triumphant return this year. 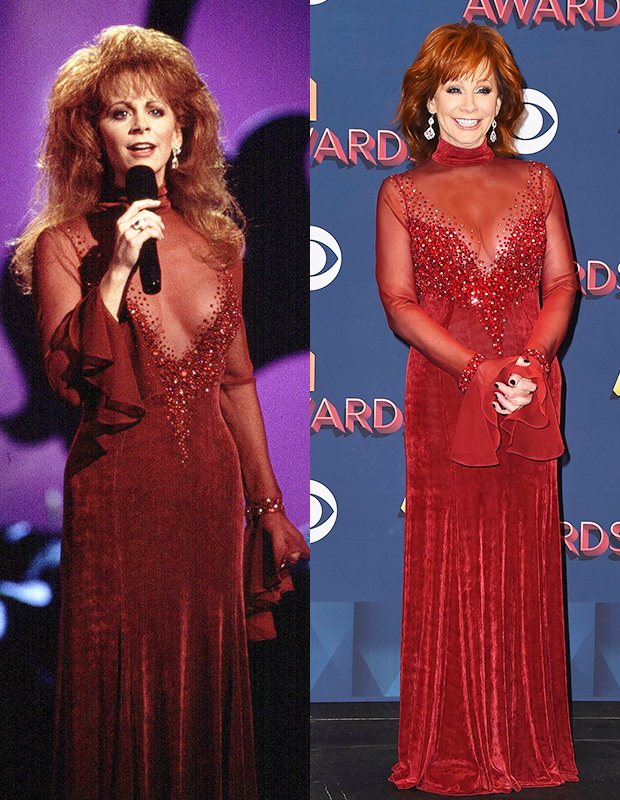 “I guess they finally figured out it only takes one woman to do the job of two men,” Reba joked during her opening monologue. The hilarious jab had the crowd cracking up — even Blake had to give her a standing ovation for that one! So good!

Related: Reba McEntire’s Kids: Everything to Know About Her Son & Stepkids