Oops! Katy Perry, 33, unexpectedly flashed her fellow judges as well as a contestant and the crew on American Idol when she fell over in the middle of dancing to an audition and her reaction was priceless! The “I Kissed a Girl” singer got up from her seat along with Lionel Richie, 68, and Luke Bryan, 41, when she was coerced into dancing alongside Venezuelan contestant Michelle Sussett, who was singing the upbeat song, “Techno Cumbia” by Selena. Within less than a minute of the dancing party, she toppled over once on her behind and again on her stomach after losing her balance in heels and a tight fitted dress. Her private area was blocked out by the network, of course, but it was funny nonetheless! Lionel and Luke helped her up while the crew could be heard laughing in the background. Luke then hilariously covered his eyes in disbelief while uttering, “There are things a man can’t unsee.” Katy embraced the embarrassing moment with a funny shocked look on her face and jokingly said, “I’m the best dancer ever.”

Although there’s only been two episodes of the American Idol revival on the air so far, this isn’t the first time Katy made headlines in regards to the show. She also shocked audiences when she gave a contestant his first kiss before he started his audition on the premiere episode of the popular music competition series. Her appearance as a judge is already off to a great start and it leads us to believe there will be a lot more to laugh about as the season goes on! 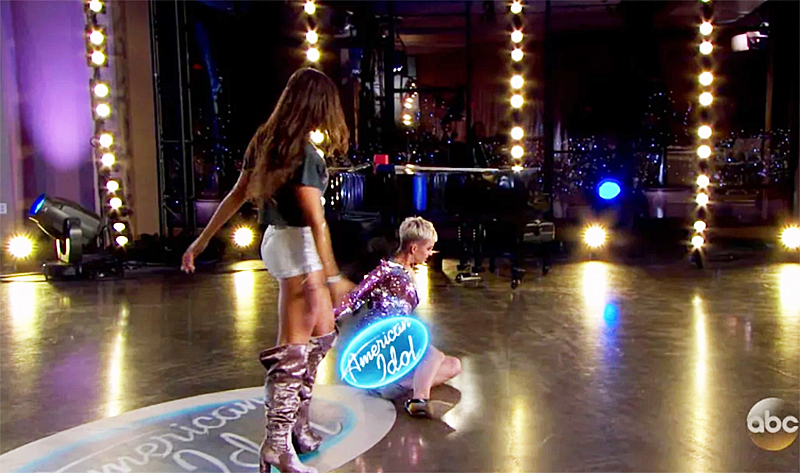 Katy’s laid back and lighthearted attitude while on the show may have to do with the perks she’s getting by being a part of it. She not only gets to enjoy watching talented singers from all over the country, she’s also reportedly being paid a whopping $25 million to do so. With that kind of dough, it’s no wonder she’s not letting a little fall keep her down!