Ashley Graham was fully committed to her performance on Lip Sync Battle — and we love it! We caught a glimpse of the major model’s upcoming performance in a short clip released from the show, where Ashley was on hand perform Shania Twain‘s hit, “That Don’t Impress Me Much,” where she dressed the part in a leopard two-piece, serving up some serious Shania vibes as she brought the singer’s music video to life with her look. Shania famously wore a leopard bra top and matching pants with a cape in the 1998 music video, and Ashley rocked a nearly identical outfit, 19 years later, for the show.

The model’s ample assets were on display in the leopard bustier top as she wore her hair half-up, keeping the focus on her sexy look. A bold red lip, (just like Shania’s!), polished off the outfit and a leopard choker and matching gloves rounded out the outfit. She added an extra dose of glam to the look, all thanks to her smoky eye.

Ashley didn’t only dress the part but she also danced around on stage as her backup dancers supported the moves. She writhes around on the ground in front of a row of hunky men, which is just like the string of guys in Shania’s video. After getting a glimpse of Ashley’s performance, we can’t wait to watch her full version of the song when the next episode of Lip Sync Battle airs on Spike on June 28 at 10PM. 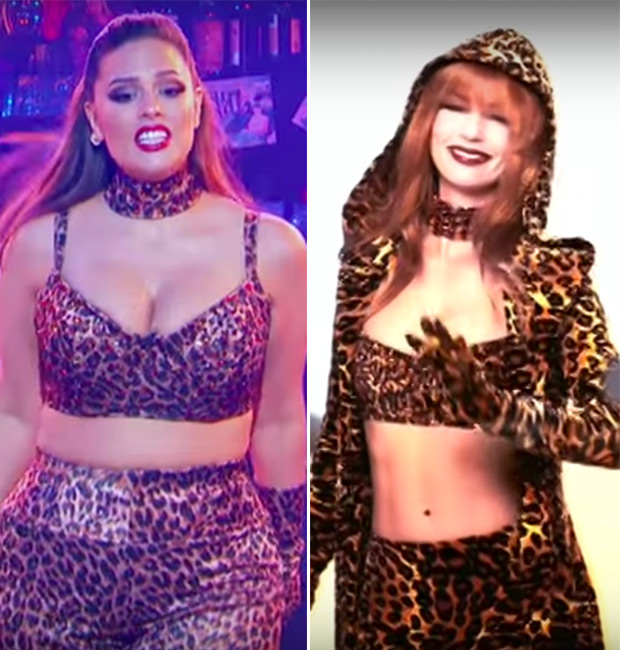 What did you think of Ashley’s look? Did you love the way she brought Shania’s music video to life for her appearance? Check it out and let us know!

Related: Shania Twain’s Siblings: What To Know About Her Brothers, Sisters, & The Family Tragedy That Kept Them Together