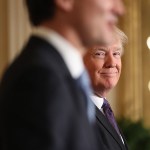 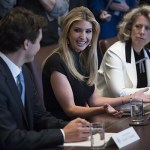 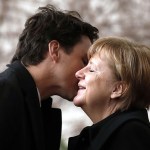 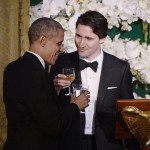 Gentlemen, keep your ladies away from Justin Trudeau! It’s no secret that the Canadian Prime Minister is quite easy on the eyes, and even women in the most committed relationship have been caught staring at him longingly. See Kate Middleton, Emma Watson and more giving Trudeau the look of love here!

Ivanka Trump is happily married to Jared Kushner, but even she couldn’t keep her eyes off Justin Trudeau during a White House meeting on Feb. 13! Photographers caught President Donald Trump’s daughter gazing longingly at the Candian Prime Minister as they sat next to each other for the official meeting for the United States Canada Council for the Advancement of Women Business Leaders-Female Entrepreneurs. Obviously, it’s a cause Ivanka is incredibly passionate about — so it certainly didn’t hurt that she had a brilliant and good looking man by her side showing support!

The First Daughter is far from the first person to be caught looking at the PM like this, though. Kate Middleton and Prince William also had a meeting with Justin, and the Duke was seen appearing totally clueless as his wife blushed and smiled at Canadian leader. She even flirtatiously pushed her hair back behind her ear in one shot!

It’s not just the ladies, either — even President Trump couldn’t wipe the look of admiration off his face when he saw down with Trudeau! President Barack Obama had a similar reaction when they met during his presidency. Check out all of these and plenty more in the gallery above!

Justin was elected Prime Minister of Canada in Oct. 2015, beating out Stephen Harper, who had held the position since 2006.

HollywoodLifers, do you think Justin Trudeau is good looking? Do you think you’d look at him like these celebs do if you saw him in person?