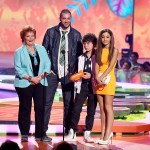 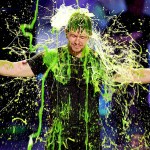 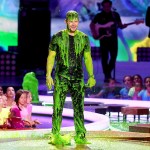 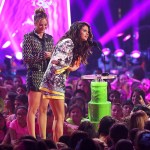 Kenan Thompson, Kel Mitchell, and many other Nickelodeon stars got together to celebrate show creator Dan Schneider at the 2014 Kids’ Choice Awards. The stars paid tribute to Dan, who created many hit shows such as ‘Kenan & Kel,’ Sam & Cat,’ and even ‘All That’!

Congrats, Dan Schneider! The Nickelodeon genius was presented with the Lifetime Achievement Award at the 2014 KCAs.

Kenan and Kel stars Kenan Thompson and Kel Mitchell reunited on Saturday, March 29 in Los Angeles for the Kids’ Choice Awards. The two actors starred together on the hit 1996 show, created by Nickelodeon’s Dan Schneider.

Kenan and Kel reunited to celebrate Dan’s career during the KCAs, along with many other Nickelodeon stars. Ariana Grande, Avan Jogia, Drake Bell, and many more took the stage to honor Dan with a very special Lifetime Achievement Award.

Kenan & Kel Have Not Spoken In ‘A Minute’

Kel, who is still acting and has even appeared on Nickelodeon’s Sam and Cat, has a major social media presence. The actor is on Twitter and Instagram, and he also keeps his official website up to date.

On March 19, Kel did an interview with Madame Noire saying that he and Kel had not been in contact in quite some time.

“Super happy for Kenan on SNL,” Kel shared. “I mean when he got the job, excited about it. have we spoken in a while? No, I haven’t seen Kenan in a minute. But we took two different paths.”

Rumors of a beef between the two stars surfaced on the internet a few years ago, but Kel says that is simply not the case.

“I’m still happy for him, there’s no beef or anything like that.” Kel explained. “I know everybody on the internet wanna know what’s going on, but I got love for my brother.”

It’s good to know these two are not beefing! However, it should be noted that while Kel posted lots of Instagram photos from the KCAs, not one of them was with his “brother” Kenan.

Tell us, HollywoodLifers — Did you watch the 2014 KCAs? What did you think of the reunion? Let us know your thoughts below!