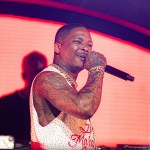 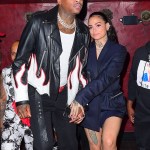 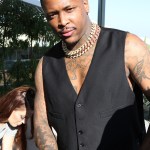 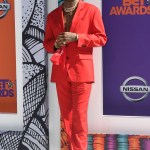 It’s official: YG and Kehlani are making beautiful music together. The rapper and singer made their debut as a couple at New York Fashion Week, so get the scoop on Kehlani’s new bae.

In a real-life case of an episode of Love & Hip Hop: New York, rapper YG, 29, and R&B singer Kehlani, 24, confirmed their romance while attending a New York Fashion Week event on Sept. 5. The two were seen walking hand-in-hand into the Kith show on Thursday. This is the first time that these two were together in public since rumors of a romance began to swirl. When asked by reporters if this public outing meant “it’s official,” Kehlani responded with a sly “Mhmm.” So, who is Kehlani’s new man?

1. He’s a rapper from Compton. YG (born Keenon Daequan Ray Jackson in Compton, California) is a rapper. YG stands for “Young Gangster.” When he was 16, his father went to jail for tax fraud. YG was arrested two years later over a botched home invasion, and he served a brief sentence. During that time, he was participating in the “jerkin’ movement,” a dance movement popular with house parties.

This involvement landed a deal with Def Jam. His debut album, My Krazy Life, dropped in 2014 and debuted at no. 2 on the Billboard 200. His second album, Still Brazy, came in 2016 and his third, Stay Dangerous, came in 2018. He recently dropped 4Real 4Real, which, if you couldn’t tell, is his fourth album.

2. He’s also an actor. YG has explored other ventures besides music. He dove into the fashion world with his label 4 HUNNID (which began as a record label but expanded into a fashion line and a lifestyle brand in 2017.) On top of that, YG is also an actor. He had a supporting role in the 2018 movie White Boy Rick.

3. He was shot in 2015. In the early hours of June 12,2015, YG was shot “three times in the hip” while at a Los Angeles recording studio. After the shooting, a friend drove him to a nearby hospital. Since the shooting, YG has opted to record in at a more secure facility in Burbank. “From my first album to my second album, and from my second album to my third album, it took me two years to put out each project,” he told Billboard. “That wasn’t my choice. Life was changing: I got shot, I had a daughter. It was crazy — it took a little longer.”

4. YG was close with the late Nipsey Hussle. YG was a pallbearer at Nipsey Hussle’s Los Angeles memorial. The two were close friends and collaborated frequently.

“We went thru so much shit together tryna make it out of LA with this rap shit, But we always got thru it then talked about it & after we talked,” YG posted to IG on April 3, after he finally found to words to memorialize his friend.”We laughed! You was a real big bro to me no kap. YOU 1 OF A KIND! I took so long to post you kuz I Kant believe this shit, I don’t wanna believe this shit. I’m not never accepting it.”

“You Broke,” “Bitches Ain’t Shit,” and “Grindmode,” are considered staples of L.A. hip-hop, according to Billboard. One of their songs, “FDT” (for “F*ck Donald Trump”) became a rallying cry after the 2016 election. “To have your song playing while all that was going on,” YG told the publication, “that’s the power of music.”

5. Just like Kehlani, he recently welcomed a new baby. YG welcomed his second daughter, Vibe, with Catelyn Sparks in July, according to CNN. The two are also parents of a three-year-old girl named Harmony. Kehlani also recently became a mom. She gave birth to daughter Adeya Nomi in March. Her father is musician Javie Young-White.