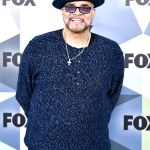 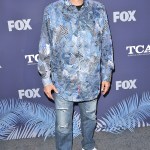 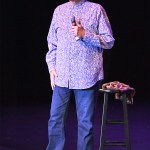 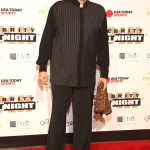 Sinbad, a comedian who is known for his stand-up and on-screen roles, is recovering after suffering from a stroke at the age of 64.

“It is out of sincere love that we share Sinbad, our beloved husband and father, is recovering from a recent stroke,” Sinbad’s family told our sister site, Variety, in a statement on Nov. 16. “Sinbad is a light source of love and joy for many generations. While he is beginning his road to recovery, we are faithful and optimistic that he will bring laughter into our hearts soon.

The statement concluded, “Our family thanks you in advance for your love and support and ask for continued prayers and his healing. We also ask that you please respect our privacy during this time. Thank you.” Sinbad, whose real name is David Adkins, just turned 64 on Nov. 10. Here’s more to know about the legendary comedian.

1. He’s best known for his HBO specials. Sinbad’s breakthrough role was on The Cosby Show spinoff, A Different World, which he starred on from 1988 until 1991. He played Coach Walter Oakes in the series. He also began getting recognition for various HBO comedy specials in the early 1990s, and eventually landed his own comedy series, The Sinbad Show, which was on from 1993 until 1994.

2. Fans are convinced he starred as a genie in ‘Shazaam.’ For years, people have talked about Sinbad starring as a genie in an early 1990s movie called Shazaam. However, there is actually no evidence of this movie ever existing. In 1996, Shaquille O’Neal starred as a genie in the movie Kazaam, which has added to the confusion. Fans who swear they’ve seen Shazaam are convinced that Kazaam was just a rip-off of the ‘original’ movie, but even Sinbad has said that Shazaam doesn’t exist. “Have you noticed that no one my age has seen this Sinbad Genie movie?” he tweeted. “Only you people who were kids in the 90s. The young mind!”

3. His most recent role was in 2019. Sinbad’s most recent role was on the sitcom, Rel, which was on for one season in 2018-2019. The series was loosely based off co-creator, Lil Rel Howery’s, real life, and told the story of a man who was trying to rebuild his life after his ex-wife slept with his barber. Sinbad played the title character’s widowed father, Milton.

4. He’s married with two kids. Sinbad married Meredith Fuller in 1985 and they had two children together. Although they divorced in 1992, they eventually remarried ten years later.

5. He served in the military. Sinbad was part of the United States Air Force, where he served as a boom operator. However, he was dishonorably discharged in 1981 for continuously “going AWOL” Sinbad has said that he was in “denial” over not making the Air Force’s basketball team, which is what led to him being M.I.A. so often.