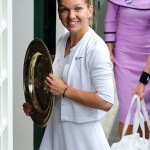 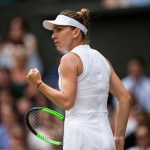 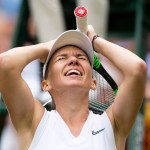 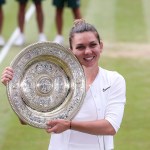 Romanian tennis player Simona Halep won her first Wimbledon title ever when she beat Serena Williams at the championships in London on July 13. Here are five things you should know about the impressive athlete.

It’s a great time to be a tennis fan. While fans were watching to see if Serena Williams, 37, would Wimbledon for the eighth time on July 13,  Simona Halep impressed instead, winning her first title at the popular championship in London. The 27-year-old tennis star beat the greatest player in the history of the sport with a 6-2, 6-2 result, proving she’s ready to take her own spot at the top and go down in her own history. Here are five things you should know about the new champion.

1. Her mom helped inspire her to win her first Wimbledon title. After her awesome win, the amazing athlete opened up on the court about how her mom had always dreamed of that moment. “It was my mum’s dream when I was about 10,” she said. “And the day came and my mum is here to see it. I have worked a lot to change a little bit my game to play on grass. I started to feel this year when the ball comes to me I knew what to do with it.”

2. She comes from a family of athletes.

Simona was born in Dobrujan, Romania. Her father was a former soccer player for the AS Săgeata Stejaru club. At age four, Simona saw her older brother playing tennis and she picked up a racket to be just like him! Awww!

3. Her winning history made her the second best professional tennis player for the past few years.

In 2013, Simona won her first six World Tennis Association titles. The last time that happened was in 1986, when Steffi Graf won her first 7 titles in a single year. Not surprisingly, the WTA named Simona its Most Improved Player for 2013. She went on to rank No. 1 for the first time in 2017 and held the ranking for 48 consecutive weeks. As of 2019, she won two Grand Slam titles, the 2018 French Open, and the 2019 Wimbledon Championships.

4. She’s tough but has a history of injuries.

Simona won an US Open match despite a thigh injury in 2015. Sadly, she’s had her share of physical problems. When she made it to the Wimbledon semifinals for the first time in 2014, she lost due to an ankle injury. She had to pull out of the 2014 Rogers Cup due to a knee injury. And, it was a knee injury that forced her to give up in the finals of the Indian Wells Masters tournament, handing the victory over to Serena Williams.

5. She has had numerous endorsements with companies throughout her tennis career.

Before May 2014, she had apparel from Lacoste and shoes by Nike. She then went on to get apparel from Adidas before signing a contract for apparel with Nike in Feb. 2018. In addition to apparel, she has also endorsed other products such as Hubolt watches and was a brand ambassador Mercedes-Benz Romania.