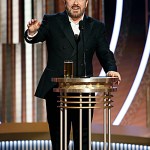 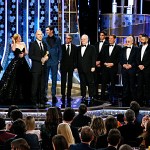 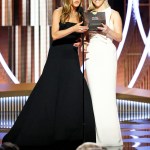 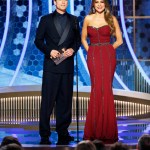 Spike Lee’s children – Jackson and Satchel Lee – will serve as ambassadors during the 78th annual Golden Globes ceremony, so get to know all about Spike’s history-making daughter.

History will be made at this year’s Golden Globes. For the first time in the Hollywood Foreign Press Association’s history, two siblings of color – Jackson Lee, 23, and Satchel Lee, 26 — will serve as ambassadors during the awards show ceremony. The son and daughter of iconic director Spike Lee are “proud to carry our father’s legacy of storytelling to bring attention to communities close to our hearts,” Satchel said in a statement, per The Hollywood Reporter. Additionally, Jackson is the first Black male ambassador, and Satchel, as you’ll see below, is also shattering barriers with her appointment.

Spike, 63, — who sadly didn’t get nominated for his critically-acclaimed 2020 film, Da 5 Bloods – celebrated on his Instagram, saying that his wife (and mother of his kids), Tonya Lewis Lee, “deserves all the credit.” As the world tunes in to watch the ceremony, here’s what you need to know about Satchel Lee:

Satchel Lee Is The First Out Queer Golden Globes Ambassador.

The Golden Globes Ambassador’s role is to assist during the award ceremony and raise awareness around a philanthropic cause of their choosing. Being the first openly queer ambassador, Satchel focused her efforts on access to health care for LGBTQ+ people by partnering with Callen-Lord, an NYC-based organization helping the queer community, per Out magazine. “I chose Callen-Lorde because I’m a New Yorker,” says Satchel. “I wanted to do something that was around health care, and I wanted to do something centering around the queer community.”

“Callen-Lorde does amazing work,” she told the publication. “They provide full comprehensive health care to over 18,000 patients a year, and that’s done regardless of their ability to pay. It’s a lifesaving organization. After the year we just had, I have so much more respect and understanding for doctors and nurses, and healthcare providers. Callen-Lorde didn’t close its doors once during [the pandemic]. It was also one of the first facilities in New York to start testing and one of the first to start giving out vaccines. They’ve really been ahead of the pandemic in the city, and so to be able to applaud the healthcare providers there in this way was something I was very honored to be able to do.” Thanks to Satchel, Callen-Lorde will receive a $25,000 grant from the Hollywood Foreign Press Association.

Where Did Satchel Go To School?

When Satchel says she’s a “New Yorker,” she means it. She graduated from New York University’s famed Tisch School of the Arts in 2017, according to Vogue. Her thesis was a film shot by photographer Tyler Mitchell.

Has Satchel Worked On Any Of Her Father’s Films?

Satchel did work with her father and brother on a short film for luxury brand Coach, entitled “Words Matter.” Starring Coach brand ambassador Michael B. Jordan, the short video – which Satchel co-wrote with her dad – shows the Black Panther star ride a motorcycle out into the desert. He finds rocks with hateful words (“EVIL,” “BIGOTRY,” “LIES,” etc.) carved into them, tossing them aside for rocks bearing words like “JUSTICE,” and “TRUTH.” The film echoed Spike’s 2019 Oscar acceptance speech, one that urged people to “make the moral choice between love versus hate.”

What Does Satchel Do?

Satchel has shifted her attention away from film and more towards “queer fashion and art” with the queer publication Drome, where she serves as the creative director. “If I had to define my dream job, I’ve always said from a young age that I just want to be a Gertrude Stein-type of person,” she told The Hollywood Reporter. I want to know everybody, I want to know what you’re working on, and I want you to tell me how I can help make that a possibility.

Satchel Is Unafraid To Speak Her Mind.

As the daughter of Spike Lee – who has confronted America’s history of systemic racism in films like Do the Right Thing, Malcolm X, Bamboozled, and BlacKkKlansman – Satchel is described by THR as “more reserved” than her brother but “still willing to be frank when discussing institutional inequities facing black and LGBTQ people.”

“Our father has always told us to do what we want and not really listen to what anybody else thinks — including him and my mother, which then becomes somewhat of a Catch-22, but the advice is still good,” she told THR. “And our mom’s always been about teaching me to look out for myself, which is probably the most important lesson you can teach someone.”

Satchel also sees her role as Golden Globes ambassador as a way to send a message to queer creators and creators of color that Hollywood belongs to them too. “The people who are making decisions need to listen to the people who know what they’re talking about and get out of their own way,” she tells Out. “We’re also having generational divides too, right? Gen Z is very powerful — more powerful than Millennials, I think — but their [lived] experience is so completely different. We have to trust that people know what they’re talking about. We’re trying to make everybody feel included and feel represented and feel seen, and if you don’t know, then you should probably just shut your mouth and listen to somebody who does.”