Spike Lee changed the game when She’s Gotta Have It was released in 1986. More than 30 years later, the revolutionary film is being adapted into a 10-episode TV series for Netflix. She’s Gotta Have It revolves around Nola Darling, a Brooklyn-based artist in her late twenties struggling to define herself and divide her time amongst her friends, her job and her three loves: the “Cultured Model,” Greer Childs; the “Protective Investment Banker,” Jamie Overstreet; and “Da Original B-Boy Sneakerhead,” Mars Blackmon. Spike is directing the entire series and serves as creator and executive producer. His wife, Tonya Lewis Lee, is also an executive producer on the show.

Cleo Anthony, who plays Greer Childs, stopped by our NYC office to talk about all things She’s Gotta Have It, which hits Netflix on Nov. 23. He told HollywoodLife.com EXCLUSIVELY about the insane audition process he went through to get the part of Greer, the deviations the show makes from the movie, and more. He also teased the evolution of Greer Childs since the show has 10 episodes to explore the main characters. Check out our Q&A below!

Tell me about your audition process for She’s Gotta Have It.
Cleo Anthony: My audition process was different than anybody else’s audition process, because I submitted a tape, I came in for an audition, and then they taped it and sent it over. Then they had me come in for a call back. Then I was told I did not get the part. I was devastated. Then one Thursday morning I’m in bed sleeping, and the phone rings at 7 a.m. My agents said, “So Spike wants you in New York for dinner.” I’m like, “What day?” He’s like, “Today.” I was thinking we had to book a flight. My agent said, “He already bought your ticket.” I was supposed to leave in two hours, so I was scrambling. I was trying to get my flight changed and then my phone rang. It was Spike. He was like, “Yo, this is Spike.” I’m like “Oh my god. Hey, Spike, what’s up man?” We have this conversation, and I just throw things together to get out the door. I go down to the car, and I tell Spike I’m in the car and I think I’m actually going to make it. He was just like, “Good, you got no choice.” Then he hangs up the phone. So I get to the airport, and I’m cutting it close. I got my bag and I go to check out, and they’re like, “We’re sorry, sir. We’re no longer boarding for this flight.” My manager said to leave the bag and get on the plane, but they said I couldn’t get on the flight. I was thinking, “Oh, God, now I got to call Spike Lee and tell him I missed the flight.” So I called him and told him I missed the flight. There was a moment and then he said, “So catch the next one.” That was it. Catch the next one. That was it.

That is the craziest story that I have ever heard. So you got to New York?
Cleo Anthony: Yeah, I got to New York. I’m wearing my clothes, ready to audition. I’m trying to figure out where I’m going to audition, because I was told I didn’t get the part so I figured I had to compete with somebody else. My agent thought I was going to have to read against somebody. I go back over to Four Acres, and I’m waiting to audition and some other cast and people come. Nobody was telling me anything. Then Spike said we’re all going to lunch. We go to lunch, and he had all these She’s Gotta Have It 30th anniversary books. And he was just sitting there talking to people and writing in the books. At one point, he handed me a book. I open it up, and it said, “To Greer, Spike Lee.” That’s when I knew I got the part.

What can you tease about the evolution of Greer in this series? Tell me a little bit about what he’s going to be like in the TV series versus the movie.
Cleo Anthony: Okay, well in the movie, Greer was very narcissistic, very superficial, and shallow. He thought he was better than everybody, but just because he was pretty and particular. That’s why he thought he was better at it then everybody. My character still thinks he’s better than everybody, but it’s because he’s French. He’s from Paris. He’s more cultured. Greer’s more. Because of that, he’s got those same characteristics, but in the show you find out why. He’s not just stuck on himself. His mom is a supermodel and walked runways in Paris her whole life. He grew up in Paris around supermodels. He holds himself to a higher standard. Where he’s from, he’s the norm. I like to think he’s like an Olivier Rousteing [Balmain’s creative director]. If you took him and dropped him in the middle of Brooklyn, it’s going to be a whole other world for him. He’s going to think he’s a certain way above the people around him, and that’s what I adopted for this character, but you get to see why. You also get to find out that Greer has almost a bit of resentfulness towards New York and America because of the racism over here that’s not over in Paris. That’s not how he grew up. When he gets here, he’s being labeled and put in these boxes and categories. Nothing is different to him, here and there, but to everybody here, all of a sudden he’s a different person. So there’s a bit of resentment because he’s not treated the way he’s treated over there.

Was there ever a challenge in spreading the story out to 10 episodes or did you just feel like you had so much creative freedom in terms of the story?
Cleo Anthony: I don’t think it was a challenge. I wasn’t one of the writers, for one, but it felt natural and organic. There’s so many issues covered. Race is covered, as well as gentrification, body shaming, body issues for women, sexuality. There’s just so many topics that are covered. There’s just tons of content, and you can stretch that over several seasons.

What can you say about how the show has adapted to today’s world? Because, you know, life 30 years ago was completely different than it is now.
Cleo Anthony: And it pushed the envelope 30 years ago, that’s the thing. And the show is going to continue to push the envelope. So there’s still going to be topics and things where people are going to be like, “I don’t know about that,” but that’s what the first one did. The movie was able to dig that deep into Nola’s life, but in the TV show, you find out she’s got so many opinions on so many issues and she’s a well-rounded individual. She’s actually more committed to being true to herself than she is to just being with all these guys. No matter what the odds, no matter what the repercussions, she’s going to be true to her heart.

Why do you think Greer is the right guy for Nola?
Cleo Anthony: It’s a biased opinion, but I think Mars isn’t ready for her, and I think Jamie’s too far gone in the eyes of Greer Childs. In Greer Childs’s eyes, Jamie’s got his own set of issues and a past. Greer just thinks Nola’s better than that and doesn’t need to deal with that. Greer is definitely successful. His loft is gigantic and so curated. There’s not a pillow that’s not exactly where it’s supposed to be and not a pillow that I didn’t want in that exact spot. So I think Greer is the right one for her. In Greer’s eyes, what else could you want?

So Greer is the one who seems to have it all together. Are we going to maybe learn that he maybe doesn’t have it all together?
Cleo Anthony: Yeah, we learn about Greer, and hopefully we can get deeper into it in season 2. Greer’s got everything. His watch is $30,000. It’s a Cartier. It’s beautiful, and that’s just Greer. When he walks in a room, all the women’s heads are turning, and he can just pick and choose. They all know that the ones next to them have been with Greer, but they’re okay with that because they got to be with Greer. That’s his lifestyle. But I think I would like to see that Greer is a man-child, and through Nola he grows into a man. He doesn’t know yet that he’s not fully matured into manhood because of how things come so easy, and if he throws a tantrum, he gets his way. To anybody who gets their way when they throw tantrums, that is the way to get what they want, and there’s no other way. That’s what I think he should discover about himself. 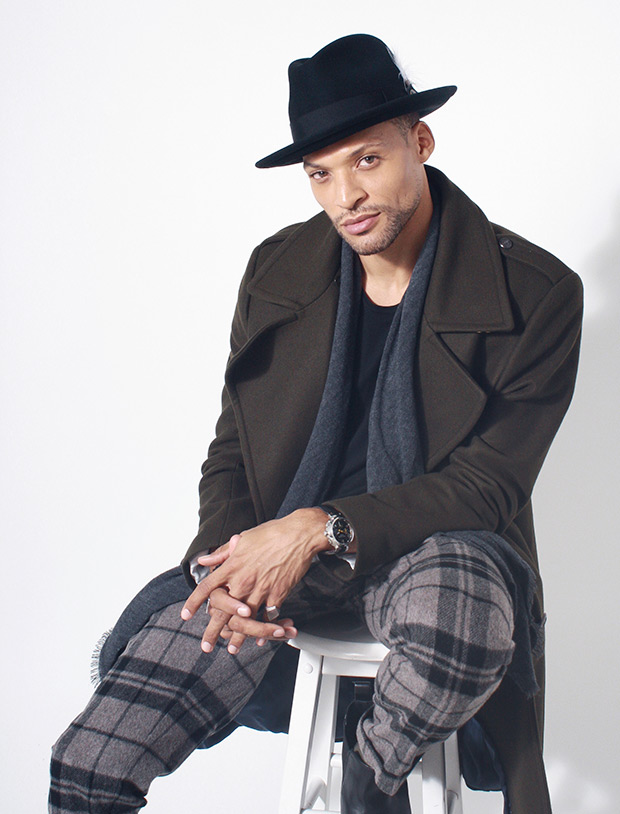 HollywoodLifers, are you going to watch She’s Gotta Have It? Let us know!